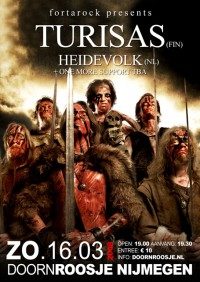 Heidevolk
The first folk-metalband which I ever got to see live was Heidevolk. They share the stage with Turisas, reason enough for me to drive to Nijmegen. The band is packed on a very small stage, but this doesn’t bother them, they deliver, and in a perfect way. A very good performance, everything sounds the way it should. You can hear every word they’re singing, the guitars are fine, and they there is this violin… perfect. What a pity they have to make place for Norther after they have played all their known songs and a few new ones.
Score: 3/5

Turisas
A good start so far. The first headlining tour for Turisas. After the warming up by Heidevolk, the first disappointment came, this was called Norther, despite the fact Ensiferum’s frontman Petri, plays the main role in this band, with their pure metal, they can’t stand in the shadow of Ensiferum with it’s folk.
Then there was Turisas, they were in the Netherlands before, that’s when they lost their accordionist, this time a performance without their new accordeonist, because of the flue. But this battlemonster knew how to fight, even with this arm chopped off. The playlist had to be adjusted, but the band played nice, despite of the sometimes long chitchats of their front-man. Matthias obviously wasn’t pleased with the bear he got, so the audience tried to explain at a hilarious moment, the right choice of bear was Hertog Jan, if they succeeded….
An unforgettabel evening!
Score: 3/5