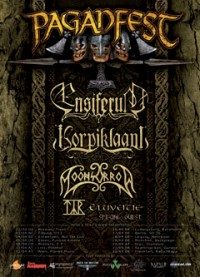 Ein automobile, zwei automobile, drei automobile. Enough drunks, even for we got in, but it wasn’t allowed to take the booze with you inside, and this caused an enormous mess. A river of beer, wodka and what else. When we made it inside the venue, there was a nice crowd already, we waited and waited, but no band was entering the stage.

Adorned Brood
When the time for the first band was almost gone, they entered the stage to tune their instruments. This band, Adorned Brood, made quite a show of the tuning, causing the bored audience to shout “zugabe! zugabe!” (We want more), when they stopped. There was quite a nice atmosphere, but Adorned Brood could only cath the audience with one song, this was “Was sollen wir trinken”, a hit on every folk-party.
Score: 0/5

Helrunar
The second band was Helrunar, the audience was picking them up in a nice way, and they played well, but unfortunately no encore for them, time was up. The audience could should what they wanted the organisation was unpersuadable.
It was time for Equilibrium, but where were they> Not in the Funbox, everyone was disappointed when the announcement came they couldn’t make it.
Score: 3/5

Eluveitie
No Equilibrium, but Eluveitie was present. These Swiss folk-metallers filled the whole venue with their very own sound and instruments like hurdy-gurdy, violin, bagpipes, Bodràhn and more instruments which most people have never heard of. The playlist van Eluveitie was: Inis Mona, Gray Sublime Archeon, Of Fire, Wind & Wisdom, Bloodstained Ground, The Somber, Lay Your Gaulish War, Tegernako.
Score: 3/5

Tyr
The next band was Tyr, with their beautiful guitar and Heri’s delicious voice, but because of the poor sound, something which bothered the whole festival) the music didn’t come out like it was intended and the listeners stayed put.
Score: 3/5

Moonsorrow
When Tyr cleared the stage, Moonsorrow entered, the first of the three Finnish bands this evening, they got the audience going with nice songs like “Jotunheim” and “Unodoksen Lapsi”, they closed their set with “Pakanajuhla”. It’s was a perfect day so far, but they the two main acts, Korpiklaani and Ensiferum came.
Score: 4/5

Korpiklaani
The first of the main acts was Korpiklaani, with their happy tunes they got all 1500 people in the hall going. The atmosphere was right and they played an terrific show with: “Wooden Pints”, “Cottages and Saunas”, “Tuuli Kokko”, “Kipumylly”, “Keep On Galopping”, “Pellonpekko”, “Journey Man”, “Paljon on Koskessa”, “Kiviä”, “Happy Little Boozer”, “Li Lea Voibm”.
Score: 3/5

Ensiferum
At the end of this superb evening my favourite band Ensiferum climbed the stage. They proved themselves a true main-act, and they played exactly what was expected from them. They even played my favourite song “Treacherous Gods”.
Playlist Ensiferum: “Ad Victoriam (Intro)”, “Iron”, “One More Magic Potion”, “Ahti”, “Lai Lai Hei”, “Guardians of Fate”, “Dragonheads”, “Token of Time”, “Victory Song”, “Blood Is The Price Of Glory Medley”, “Treacherous Gods”, “Battle Song”.
Score: 3/5

At the end of the evening everyone was tired and very drunk and it was time to go home, but we can look back on a superb Paganfest evening we’ll be back next year for sure 😀