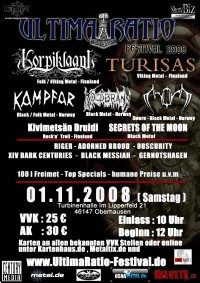 A great (folk) metal festival in an old factory in Oberhausen, fast and easily accessible from the Netherlands, only an hour across the border at Arnhem. A fantastic filled stage these days, which makes a trip across the border very worthwhile. The whole festival is suspended from the new DVD of Turisas, which is shown in between the bands, on large screens next to the stage. A wonderful line-up, so we could not pass.

Adorned Brood
For the second time I get to see Adorned Brood performing as the opener of a festival. It can’t still fascinate me. Only the song “sieben tage”, isn’t screaming loud. The singer finds himself in my opinion quite popular, and is only concerned with the audience to clap and scream while the compositions can’t convince live. Like the last time, this band deserves no points.
Score: 0/10

Kampfar
I wasn’t all thrilled about the announced appearance of Kampfar, this is simply not my cup of tea. Maybe there’s a lot of Pagan in it, but I can hardly listen to this and my Norse isn’t the best).
Score: 0/5

Black Messiah
In between the gigs, I grabbed something to eat and when I came after about 10 minutes into the now overcrowded hall, I took my usual spot just outside the pitzone. I really could not reach it, so I had to watch from the back of the hall. After my usual preparation (listening to a CD) for this concert, I had expected that I could afford to miss a bit of the concert here. Nothing was further from the truth. I do not like all Black Messiah songs, what is not strange considering their black metal background. But from “Of Myths and Legends” there are more and more songs to my taste. The performance of “Irminsul” was beautiful and then when finally the singer got to the chorus of “Sauflied”, the audience went through the roof. Hundreds of people roared with this song, and thus became the already good performance fantastic in the end.
Score: 8/10

Kivimetsan Druidi
As always I was somewhat prepared and I listend some albums of the bands I do not know so well. When this band was already on the unique combination of metal, with corresponding metal, raw male voice and an almost classical clear female voice. Even now I was flabbergasted during the show still, “Wow, what is this”, but I was soon caught up in the exciting rhythms and carried along with the beautiful female vocals. The total different way of moving by the singer, was a sight to behold. Finally a band which dares to deviate from the beaten path. Fantastic.
Score: 8/10

Gernotshagen
Gernotshagen, another nice German Pagan-metalband. This is a bit more of the raw kind, so other reviewers of Folk-metal.nl would have liked it even more. The members were dressed in beautiful outfits, which contributed a lot to their performance.
Score: 1/5

XIV Dark Centuries
And we go on to the next band, a band which I listen a lot to at home, especially their album “Skitingi” is something I like a lot. Despite I think this was a nice performance, it disappointed me slightly. Maybe this was due to the lack of stage-experience of the band. I really missed the beautiful harmony in the vocalpieces as I know them from their latest album, this is something which isn’t working out nicely in a live setting.
Score: 3/5

Turisas
As mentioned, the festival was set up around the new DVD of Turisas, which could be watched in between the bands, on large screens beside the stage. This slot was for Turisas. And although some guys and girls had already returned to their homes and the vocals were bad in the beginning, this became a great party very soon. Despite the fantastic humpa songs, the local vodka was blamed again. A fine performance.
Score: 3/5

Korpiklaani
After seeing Korpiklaani only half a year ago, it was clear to me this would be a party again. Despite the fact that many people had left after 10 hours of music, there were still plenty of people for a party. Striking detail was that there was much dancing, but there was virtually no pit. The somewhat disappointing performance of “Pinewoods” was amply compensated by rest of the show. Another quiet moment, where the singer took place on the ground with his drums. Because the rest of the band was gone, and most of the people weren’t aware of this, and thought the whole band had left the stage. Loud cries for a “Zugabe” (we want more) was the result. When the band came back for the actual encore the audience was so outrageous, the band just started a jam-session. Every single sound was obviously appreciated by the audience, Jonne responded to this with the remark they would even applaud for his “shit”.
Score: 3/5