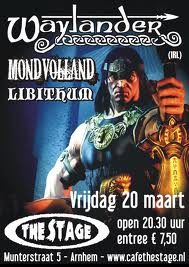 Cafe The Stage in Arnhem, a very small stage, in an attic near the famous Korenmarkt. Not a crowded evening, but a nice and cosy atmosphere.

Mondvolland
I’m happy, finally a homegrown folk metal band. After the black metal band Libithum things are warmed up a bit, now it was the turn of the men of Mondvolland. Songs like: ‘Daar, waar Donar dondert’, ‘De vuurman van Papendal’ and ‘Hoefslagen in de verte, came by and black metal influences were clearly audible ..
A performance where the band due to miscommunication had some difficulties in finding each other. They couldn’t convince me.
Score: 3/10>

Waylander
To see a band like Waylander on a tiny stage like in this pub in Arnhem. It’s a bit strange to me.
The band opens with a gorgeous instrumental intro, followed by the wonderful ‘Walk With Honour’.
They played many well-known song like “As The Deities Clash”, “Beyond the Ninth Wave” and “To Dine In The Other World”. “Born For The Fight” was saved for the last and this song was loudly chanted along.
A nice evening, and again some folk-metal bands added to the list “seen”.
Score: 3/5