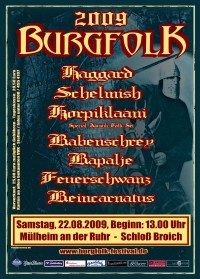 This annual folk-festival in Mülheim has a lot of nice bands to offer every year again, this time Korpiklaani showed up at the beautiful courtyard.

Reincarnatus
The first band which hit the stage was the Dutch Reincarnatus, this Mediëval folk band was a suprising opening act, because of their sound and the fact they are all women.

Feuerschwanz
The second band was the German Feuerschwanz, they describe their musis at their website as mittelalter folk comedy and when they did their soundcheck, they were already loved by the audience. I had the misfortune, I only could see two of their songs, but they were certainly very cheerful and the audience went completely insane.

Rapalje
Then it was time for Rapalje, this Dutch folk band plays all kinds of old instruments and they are very popular in Germany, this caused a big party, the Germans ony didn’t know what to do with “Wat zullen we Drinken” (What shall we drink?)

Rabenschrey
On to Rabenschrey, this German band owned the entire audience, but this still seemed not enough to the singer. They pulled out everything they had and created a large part for the audience.

Korpiklaani
Then came the actual highlight of the evening, it was finally time for…
Korpiklaani, they came up with a very surprising act, no vodka, beer beer of wooden pints, but God are on fire and Kaedet siipinae and they did this with an acoustic guitar instead of an electric one. For the first time in the history of our much revered Finns they played an unplugged show, which made the evening even more special.
Score: 7/10

Schelmish
After that a German band called Schelmish was on, this medieval punk rock band released a very special sound with it, of course, a drum, a keyboard, a bass guitar and an electric guitar. But also some bagpipes, medieval trumpets, flutes and drums made this a very nice and joyful act. They ‘picked’ someone from the audience who could sing with them, a man named Maria(o) was elected with an independent shirt and he gave a tremendous show, to the surprise of everyone, including the band itself. As the lead singer of the band isn’t able to sing for a while soon, this man instantly became his substitute.
Score: 7/10

Haggard
Then it was evening already and unfortunately the festival was almost over, but not before… The band Haggard. Haggard, well what can I say? It is not gothic it’s not metal it is not rock, punk, folk, classical, and no opera. But it has all the best and therefore makes it a very nice sound, surprising for those who were not drunk at the end of a very successful festival in Schloss Broich.

But before I end this review of this wonderful event, I would like to mention not only the bands, but the castle and the lovely park next to it, they made this day very special, but the fans which came from far and wide, in all sorts of medieval and Roman outfits, from kilt to ball-gown and Noble clothing to farmers togs, there were so many people busy out there in original and historical clothing. I have to say, what a day.