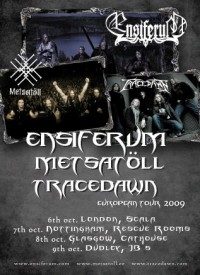 2009 was peaking, Ensiferum released their best album so far, and ensiferum is my favorite band …
… They had to live up to high expectations in Amersfoort.
Amersfoort, 19:24 h. Large parking area, vacant area, a lamppost, a parking meter, two tour buses and a building with large letters De Kelder.

Tracedawn
Tracedawn got to start this evening, even though it is not folk metal and the hyperactive singer and bassist sometimes are a little disturbing, this was nice party, apparently ‘De Kelder’ in Amersfoort was in for it.

Metsatöll
And then… Metsatöll, well what to say about that. Metsatöll in one word: remarkable.
It seems arrhythmic but when you listen to it closer it isn’t, which makes it nice. Strong clean vocals and strange metal: no grunting / shouting or other vocal violence. And a man who can sing and play bagpipes at the same time! This act was certainly successful.
Score: 10/10

Ensiferum
Finally, I have waited for this whole year, Ensiferum is back in the neighborhood! And of course I there. Totally crushed in the front where everyone is fighting for the best places I was. The well-known formation entered the stage while the audience was shouting, with only one adjustment in the lineup, well… after a time only playing live with the band, Emmi Silvennoinen is finally a permanent member of Ensiferum. What can I tell you more about Ensiferum than how good they are? Despite ‘Heathen Throne’ they played all the songs from ‘From Afar, besides that they treated us on ‘Slayer of light’, ‘Little dreamer’, ‘Iron’, ‘One more magic potion’, ‘treacherous god’, ‘Tale of revenge’ and the ‘Battle song’, this meant 100 minutes of awsome, flawless super good music, in fact, the best music known in this world.
After all this Ensiferum met my very high expectations and I hope they will be back on Dutch or West German territory very very very soon. And I?, I’ll be there again.
Score: 10/10