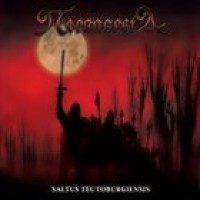 This demo of the Dutch band Nornagesta was recorded way back in 2009 already, and the band is working on a new one. We let this one spin around in our player for a while to be prepared for the new one.
This demo is entitled Saltus Teutoburgiensis and the first track we get is immediately the titletrack. Besides the fact it’s a nice name for an album, it’s also obvious why this promo is named after this song. After a nice guitar-intro we get a very nice song with an very nice cocky guitar in it. The music is folk-influenced but close to the melodic death metal. A very nice song.
This CD may be recorded at home with a rather limited equipment, but the quality isn’t bad at all.
Storm is another nice one, the vocals aren’t really nice in my opinion. A lot of metal-singers try to sing in this very low voice, but a lot of times it seems a little unnatural. This track is an example of this.
The same goes for the next song Zeven Leugens (seven lies), but here is this nice cocky guitar again which gives it all a fresh taste.
A Bitter Return is the 4th and last track of this demo, and this is again a very nice one. The guitar has a very prominent part in the music of Nornagesta and this is a nice choice. The guitar-parts gives their music a very nice feel.

As a beginning band the recording of a demo is a way to look closer to your music and it is a nice way to show people what they can expect. A demo is almost never of a very high quality, but with the equipment nowadays it’s possible to get a decent recording. And this is exactly what Nornagesta has done with this. Of course there can be improved a lot in the recording, but their not bad at all. And what’s more important: it gives a nice impression of their music. And I can assure you, their music is nice. They should have a lot more gigs, at least throughout the Netherlands.
And I’m very curious about their next demo. And hopefully we get a real album in a short time.