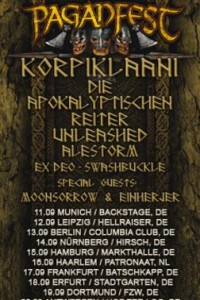 T-shirts pagan fest where pagan is crossed and pirate is written above it? Yeah, the line-up of pagan fest this year has nothing to do with pagan. But despite the absence of pagan spirit, the bands know, this year again, how to entertain me for hours. The day started well, believe it or not, on the Internet was the wrong address was mentioned, it was damn quiet for the small building where we were, turned out the location had been moved, the right place was not mentioned on the Internet. After 1.8 kilometer walk we finally arrived at the right building.

Ahnengrab
By the time we arrived inside, the first band (the local support act Ahnengrab) was already halfway thorugh their set, good music, I must admit.
Then immediately afterwards it was time for the highlight of the day…
Score: 6/10

Swashbuckle
Admiral Nobeard, commodore Redrum and captain Crashride came on stage with only one purpose: They where bringin ‘back the scurvy’. With their ridiculous pirate, small costumes and two inflatable palm trees on the stage, they arrived with a piece of American hip-hop. They opened with Scurvy Back and then they played a lot of quick and hard Trash Metal songs. And like everyone was hoping for circle pits, walls of death, and all that stuff were all over the place, which made it a great performance. The whole crowd went insane and I can talk about it for hours, but they didn’t get to play that long. So it was (unfortunately) already time for the next band.
Score: 7/10

Ex Deo
The next band was Ex Deo. These German Romans overran us with a great tight bombastic show. They planted their SPQR banners of Rome in pagan fest. In my opinion this was the best show of the whole evening. it was very nice and tight and they completely convinced everyone in the audience.
But half an hour later, they were asked to stop, because it was time to go to the sea again for the next pirates-act.
Score: 10/10

Alestorm
KEELHAUL THAT FILTHY LANDLUBBER, it was time for Alestorm, the Scottish played very well again like they always do. A bit different this time, were the lots of songs of their new CD, Christopherwith beard this time, was wearing sunglasses (probably too much booze in Erfurt the day before).
Then it was time for the extended acts.
Score: 7/10

Einherjer
The 1st one of the 2 extendeds was Einherjer, I liked it, but probably opinions are mixed about this. Do you think Kampfar is fun? Then you would probably like this as well. The show was nothing special, but the music was all the better. Like in the rest of this event the audience got out of it’s mind again (where do they get the energy from).Score: 5/10

Unleashed
What do you have to tell about this. Nice, but very simple, and that goes for the music as well as the lyrics.

Michel: Unlike Colin, I have seen this whole concert. Although it’s not my favorite band of the evening either, I must say it was solid as a rock..
Apokalyptischen Reiter is playing inconsistently metal, there are many rock songs or portions of a song in rock and sometimes it even sounds very pop. But the singer is an fabulous frontman and he knows how to get the audience going. Songs like “Friede seit mit ihr” impressed me a lot, but also presentation of the songs was tight as hell. Other song played only with percussion or the show the singer gives waving a giant flag in a song about revolution, made this a great show. Two Reiter Maniacs with numerous inflatable horses come on stage, and these were thrown into the crowd. After this some ladies got to bang their head a while on stage, after which they stepped in a small boat to float on the audience, what an excellend show this band brought to us.
Score: 8/10

Korpiklaani
After spending all day in the hot humid overcrowded sweat smelly FZW. it’s time for the headliner: Korpiklaani.
Yeah, these Finns can be seen everywhere these days, but this time they were headlining pagan fest 09. Last year, they performed just before Ensiferum, so again one step up. Tipsy as they were, they could still put down a great performance full of drinks, because they played NO quiet song this time, we got one drinking song after another and Jonne entertained for minutes by letting the audience shout BEER! BEER! BEER! What is there more to say about Korpiklaani? Jonne’s guitar broke, and he had to do without it for two songs, when it came back, Jonne squirted beer from a bottle. Jarkko enjoyed himself on stage and Matson really need to learn English because his Finnish speeches can’t be understood by anyone.
So we are at the end of a fantastic evening.
Score: 8/10