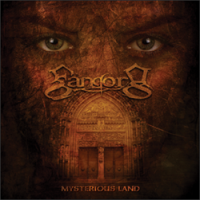 ‘Mysterious Land’ the debut-album of the Russian band FängörN was already released in 2010, but we’ve laid our hands on it, and take the opportunity to discuss it shortly.
It catches your ears at once, the band is originally a heavy metalband, the influences of this genre are strongly present. The clean vocals and the grunts are in surprisingly in English, without heavy accent. But it’s lacking some folk. Orchestrations and symphonic elements are present throughout the album, making it decent catchy heavy metal rather than folk-metal. The sixth track is in Russian and is telling us about a strong beer Troll, with a nice folky keyboard underneath is the most folky track of this album.
With ‘The Long Way’ the album ends with a nice and easy instrumental outro.
A decent heavy metal album, with lyrics about the past, but with the exception of one song it’s not very folk-metal.