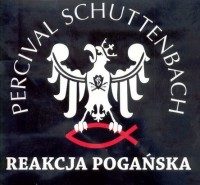 Percival Schuttenbach is the folk-metal version of Percival. Reakcja pogańska is their second full length album, their first album was released about seven years earlier.
With cello, lyre, flutes and other authentic instruments they create Polish folk-metal. Their metal is the heavy rock/metal kind, no grunts or screams, but solid guitars, drums and bass as a firm basis for the folk touch by the authentic instruments. With female and male vocals they create a very nice folky atmosphere.
The first song of this album Gdy rozum śpi is a decent song, but nothing special. The second one Rosa is very nice. Although I’m not sure the two pieces fit together, it’s a very folky at one moment and weird and modern a moment later. Seems a rather schizophrenic person to me this Rosa.
In Pani pana the nice female vocals catch your ear. Very pleasant rock voice in this strange song.
It’s obvious the members of Percival Schuttenbach know how to play folk, they do this all the time in Percival, but they show they can do this in a nice metalsong. Pocałunek has a vocal piece which is almost pure folk, but halfway fierce guitars and an angry female-voice kiss you awake and let you enjoy a nice metalsong.
After this you get a really nice one, Aziarechka’ a very nice track which is heavyly folk-influenced, the female vocals are done in this nice Slavic way. The guitars are quite catchy, but writing simple straight forward songs is not their style, so a nice cello-intermezzo is build in.
Jada konie and Lazare are songs in the same style and just as nice.
The title-track Reakcja pogańska has a nice country-side-intro in which a bunch of animals can be heard. The whispered vocals build up a nice tension and when the song is almost finished we get a nice folk-piece.
Oj dido is also a remarkable song, with the strange cello-tunes, Slavic vocals and the little bit of jazzy touch, which is something which can be noticed in other songs as well.
Satanismus starts with this nice string piece and becomes quite a catchy piece. A very nice song to listen to, but the female vocals in this one are superb, what a nice voice!
The album ends with a typical Percival Schuttenbach song Pasla.

A nice album by this Polish band. Especially the second part of the album is very nice. A heavy folk/metal sound with a lot of authentic instruments. The vocals give the music this Slavic feel, but the compositions are never straight forward. The skilled musicians give it all kinds of nice and sometimes weird twists everywhere. And it even has a kind of jazzy feel at some points.
Very nice album with a unique blend of styles.