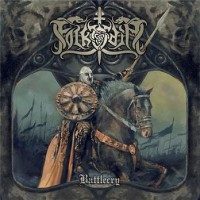 Sometimes it’s hard to discuss a CD. Sometimes you just don’t know what to say about it. If you get two of those albums at the same time, of the same band and both originating from 2010, it becomes even harder to say something decent about it.
The main problem is that there isn’t much to say about this CD. Battlecry, which was released first in 2010, gives us songs with that typical European folk-metalsound. A lot of different instruments, quite a high pace, you all know the drill.
What also seems to be a difficulty is that ‘Battlecry’ is recorded by a large group of musicians originating from different bands. This results in a very chaotic, sometimes even out of tune record. Take the song ‘Celestial Host’ for example. I don’t know what the band is doing there, but it’s definitely not the right thing; I’ve never heard a song which was so out of tune.