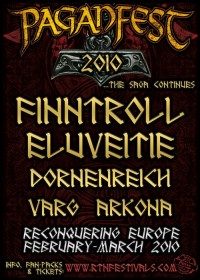 With high expectations we had traveled to Bochum in Germany. After last year’s Paganfest which admittedly was little pagan, but which nevertheless was a fantastic party. This year a line-up from which you got instantly happy. We left home in time, because maybe Arkona would open and this is still one of my favorite folk-metal bands.

Arkona
The band begins to play, the sound is not quite right…. But where is the flutist / bagpiper, he will probably come stage later… Next song…. where’s that well. Mmaybe he’s ill, but that’s not mentioned. At some point, the band asked the audience to join in. Guitar and bass withhold, you hear only crowd, drum and flute … yes, but I just do not see a flutist. So, it’s a sample… We’re claping along with a sample! A year ago I found Hollenthon with a same treatment evenly disappointing. For me goes: you can use a little tool here and there, but things which are the base and an integral part of your sound, you should also show on the stage. No flutist / bagpiper, disappointing sound and a singer who is not always in good voice. For me, a complete deception, one of my favorite folk-metal bands has just fallen from its pedestal. Colin: Finally, here we have waited a long time (at least I did). Paganfest now that’s really something I always look forward, when I received at Pagan fest ’09 a flyer for Pagan fest ’10, I just had to go there. I almost had to miss this due to an illness, but fortunately I was here this Friday recovered sufficiently to be able to just go (although I had to slow down from previous years). The line-up was as everyone knows stronger than ever. But then something happened that I had never experienced: drinking horns weren’t allowed! Ridiculous! We had to bring our drinking horns back to the car, we arrived right on time in the room because the first band was about to start at that point. The Russian band Arkona had this task, we had high expectations of this band. Bunch of crooks! This was real. unbelievable, I have no words. The whistles and all the instruments were replaced with samples. Well, ridiculous, and then the vocals were not good as well. This was really a joke.
Score: 4/10

Varg
Still fiercely discussing the poor performance of the Russians, the next band started the intro already, and a bunch of red/black bodied Germans entered the stage.
The task for Varg was clear, to let us forget the poor performance of Arkona. Varg leyed down a good act, although slightly on the tame side they started to make this right when they took of with the song “Blutaar”. The audience was totally into these guys and there was a great atmosphere. Nothing but praise for the actions of Varg, though, perhaps these gentlemen should leave their plastic little armor at home the next time
Score: 10/10

Dornenreich
What do you have to write about this. Dornenreich has an unique sound, you have to admit that. But not everybody loves this. Personally I think they have a few nice pieces in their songs, but they can’t really keep my attention in a live setting.

Alestorm
After a disappointing Arkona and an optimal sounding Varg it was finally time for the Scottish pirates. I really like to keep it to this statement. The sound was bad. Christopher’s voice is supposed to be bad, but this was “worse”. The performance gave me the feeling the band thinks it’s more important to celebrate than to achieve good performances. It sounded like this to me.
Colin: I was once again standing in the audience, because it was time for the always enjoyable Alestorm. The Scots had a new intro, and that was really brilliant. But they had better not joined in this time, Christopher didn’t have a voice, guitar Dani was more than half of the appalling performance of adjustment and the rest didn’t sound like a nice band as well. This was my 4th time I got to see Alestorm and they are worse every time, this can not be the intention. Well I liked it when Heri Joensen (singer of Tyr) joined in for the last song (Wolves of the sea), even though we did not understand why he was there.
Score: 4/10

Equilibrium
My personal favorites band this night entered the stage (along with Eluveitie and Finntroll this was the band I had the highest expectations of), it was the turn of the next German band Equilibrium. Extremely popular here in Bochum these guys and girl, and rightly so, because this was just a great performance, I can say little about it except that this is simply fantastic! Especially with the song ‘Blut im Auge’ the crowd went completely insane. This performance was simply amazing!
Score: 8/10

Eluveitie
After a long conversion, but this is necessary when you are using so many instruments as these Swiss guys. A quiet intro, a little smoke and perfect exposure. Fantastic thought the rise of Eluveitie was not the only thing that was fantastic, since everything, and I mean really everything went perfect. These Celts did not even make one mistake which was noticed, not in the somewhat harder songs, but even in the acoustic song they brought to us. Chrigel also thanked the Germans and I like to mention it here as well, Eluveitie reached the top 20 album-chart in Germany. The show was set up with great songs, the variety was amazing and the show was simply beautiful.
Score: 10/10

Finntroll
Eluveitie had set the standard high for the headliner of the tour, Finntroll. The intro was the well-known Blodmarsch (Nifelvind the intro). From the start, s NOTHING went wrong, the sound was beautiful and the whole audience joined in. The atmosphere was very nice with Finntroll. I had a wonderful spot on row two, right in front of Routa. They played all the songs they simply had to play and they played Kiteldags(which I personally found great), one of my personal favorites. They closed off (aptly) with Segersäng which means victory song. Unfortunately the night was already over and we had to return to home. Due to Arkona the evening started off badly and Alestorm failed to meet expectations, but despite of this, it was a fantastic day.
Score: 10/10