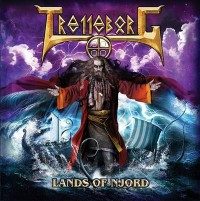 Trelleborg, the band I mostly remember by the characteristic expressions the vocalist pulled of during Hörnerfest, released their first full-length in 2010. It might be a bit late, but still, here’s the review for those who are interested in folk-metal with a lot of power-metal influences.
Because that’s what these Russians bring. The band could best be compared to Elvenking, so pounding power/folkmetal. After the first listening, it immediately becomes clear this record is a typical mediocre record. The overall sound is decent, the songs are catchy, but there seems to be missing something. Could it be the guitars, which are sounding pretty thin? Or is it the vocals, which sound a bit forced and pinched? I can’t really tell.
All in all a descent record for one or two times. Overall it’s good, sometimes the quality drops a bit. Nice to give it a shot, but nothing more.