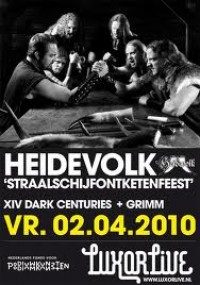 The cd presentation of the new Heidevolk-album with Grimm and XIV Dark Centuries as support.

Grimm
Finally I can see one of our own Dutch bands at work, again. The show starts nicely with a suitable film in the background.
The music sounds fine, as you would expect from Grimm. A short (Heidevolk had a lot of time planned for themselves) but good performance by the band. Cons of this performance is the lack of charisma. Something which is a danger when you use a singing keyboardist. On stage, you miss a frontman. Second drawback is the film, which is shown in the background. The usage of this film is nice, but personally I would think it would be a lot better when it was cut with other images into a beautiful whole, matching the songs.
However, I would like to see more of this band.Score: 7/10

XIV Dark Centuries
For me a great pleasure to notice XIV Dark Centuries is invited as well. Still one of my favorite bands. These Thuringers don’t get a lot of playtime, but luckily they spend it on songs of their recent albums. Unfortunately, the vocals are not loud enough in the beginning and the leadguitar sounds poor as well. After a few songs, vocals are upgraded and before the end of the battle the lead-guitar is OK as well.
The singer let us enjoy the different possibilities of his voice and the band is solid as a rock. When the sound technician had not been asleeep in the beginning, this band would had earned the full 10 points.
Score: 7/10

Heidevolk
“Wij houden slechts van flinke strijd Van vrouwen, bier en mede.” We only love big fights, women, ale and mead. Do you agree with this, than you were at the right place at April 2nd, at the CD presentation of the Heidevolk’s CD ‘Van Oude Grond’. At the entry in Luxor you became in the mood immediately, after the ticket check some old warriors were waiting for us in authentic clothing and armor. In the hall the stage was flanked by two fighters with a flag. The band started the action hidden behind nine warriors which foreclosed stage while the band played an intro. After this, the warriors left the stage and the band started with the brilliant Nehallennia (the best pictures are again at www.metalshots.com). Then we were treated to a mixture of old and new songs. The set was closed with Wodan Heerst. After that some fans enjoy themselves on stage at a contaest upholding a sword and arms, the stakes were items from the merchandise stand, which of course everyone wanted to earn. After the break, the audience was treated at a stunning performance of Alvermans Wraak, an instrumental song in which Irma on her violin duels against the guitar violence. This fight ends still undecided for me and I hope that can hear her more often on stage and CDs. Again we were treated alternating old and new songs and the entire sold out Luxor went completely through the roof. Only one time the band lost the fight and that was against the audience when Raemon’s idea for a singing along was completely going in the wrong direction. By stubbornly singing along, Heidevolk eventually won this battle again and showed they are the greatest folk-metal band from Netherlands. I can not wait for the next straalschijfontketenfeest.
Score: 8/10