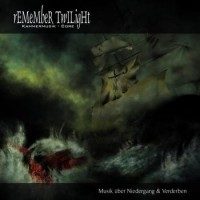 While we’re waiting for their new album, we receive Remember Twilights’ latest album ‘Musik über Niedergang & Verderben’ which was released in 2010 already. Remember Twilight isn’t folk-metal nor Medieval rock. They describe it themselves as Chambermusic-Core. Expect a lot of cello, violin and oboe, image some musicians playing in a palace a couple of hundred years ago and add rock and metal to this.
How do you like sINnTROstlos as a sinister intro. You don’t have to listen to it, the title is brilliant enough. This intro points out clearly what you can expect from this band.
The compositions on this album are very nice. There’s plenty of room for the chamber music and for the metal/rock. And although I’m not a real fan of this genre I’m of the opinion there are some very nice songs on this album, Ich Suche Gott for instance and In The Long Run – Am Ende.
There’s also room for some humour which is very obvious in a song like Mackie Messer.
They end the album with a remix, which is a total waste of this song.
Remember Twilight has created a good album with this. If you like it or not is up to you, but the music has enough nice elements to entertain you. The compositions are nice, it’s very unique and it rocks. A little bit more folk and I would have been completely satisfied.
It makes me curious for their upcoming album although.