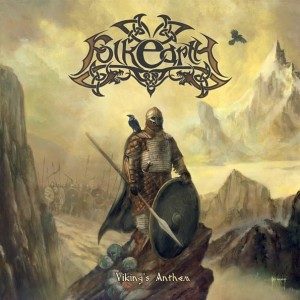 Folkearth is a project where different people from all across the World work together to record an album. These people come from all across the globe; Greece, Swiss, but also from Australia and the US. A beautiful initiative, but could this work? The CD was already released in 2010, but the label asked us if we could still provide a review. And here it is.
While the idea is beautiful, in real life it works a bit differently. Folkearth is a collective which makes pretty standard folk-metal, in the same style as Eluveitie or Ensiferum. Pretty standard, which could be said about the rest of the album as well.
And while this album has a nice and pounding start, after that the quality drops slowly but certain. For example, already in the second song ‘Ragnarok’, the flutes sound out of tune, and closer ‘Legacy of Steel’ sounds really dissonant.
Because this is a collective with musicians from all over the world, it’s almost insurmountable that the mix sounds messy at times. It all sounds a bit too crowded, and they tend to put to many different things in one song. Also, the recording quality differs from song to song; ‘To Avalon’ sounds less than the other songs on the album.