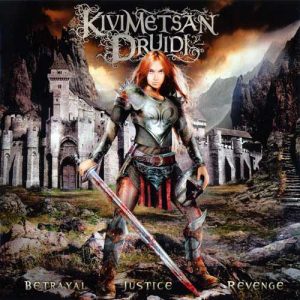 The last album of these Finns is released a while ago and so I’ve heard it a long time ago, but now we’re receiving a copy from Century records for a review.
“Lament for the Fallen”, is a nice sounding intro with guitars, leading to “Aesis Lilim”, and the album really begins. A nice opening on the CD, most certainly not their best song but a great kick-off. A wonderful album where heavy metal alternate with lovely melodic keyboards,
Joni’s grunts with Leeni-Maria’s beautiful voice (which is greatly improved after the previous album). Striking is the song “Tuoppein ‘nostelulaulu,” not because it is impossible to pronounce, but because it is a wonderfully cheerful song which we are not really used to by these druids. To enhance the contrast they have composed a nice heroic sound to join it. The next two songs are very strong, heroic, bombastic and strong varied as well!
A nice album by Kivimetsän Druidi, the sound improved clearly compared to the previous album. It is true that the album “Shadow Heart” some great overachievers and this one lacks them, but on average, it is a much stronger album with a more mature sound (mainly the vocals).