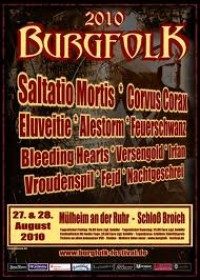 Burgfolk Mulheim guarantees a fun party. The common thread in the program is folk influences but in a broad sense. The festival began this year with a very nice Versengold, which plays real medieval folk music, followed by Elane (bluntly: Goth without balls). After that Bleeding hearts with pretty catchy music in the spirit of Green day, but with the violin.

Fejd
After this my first good reason to go to this festival, enter the stage: Fejd. Music I listen regularly to at home, but usually not too hard. Live it sounds however also a lot stronger and these Swedish guys impressed with a fantastic concert. The use of genuine folk instrument has always been my preference, but the brothers Rimmerfors, which together form the folk part of Fejd, control a lot of these instruments to perfection. The heavy melancholic sound of the lyrics was sounding impressive. Three quarters of an hour we were treated to beautiful songs from the albums ‘Eld’ and ‘Storm’, which was appreciated a lot by the audience.
Score: 10/10

Feuerschwanz
Absolute must in the “non” metal class. For those not familiar with this band, and want a good laugh, “improve your German and visit Feuerschwanz”

Eluveitie
For a year I waited for this acoustic performance of surely one of my favourite bands. If acoustic means lifeless, without feeling, disinterested, then I must say that this show was very successful. Unfortunately, it’s called acoustic for not making use of (electric guitars, etc.), so I have again just start from scratch. During the sound-check 8 cadaverous jaded faces come on to the stage, pretty uninterested they put down their stuff. After that some technical problems, thus inhibiting the actions which later can begin (sometimes came in handy). The eight enter the stage finally a bit like bags of salt (like we say here over in the Netherlands). Maybe they were just tired out from some or another disaster, or they were all ill, or blessed with a gigantic hangover. Whatever it was, it was a disgrace, you do not come on stage like this for your fans! The only one who seemed to have some sense of the performance was the singer, but unfortunately he didn’t have a nice voice, today. The performance was so shortened due to the problems which occurred in the soundcheck and after performing a few songs without any commitment, they went for the electric guitars, and tried it this way. Again, this did not help. The band was really not in the mood. Eventually “Inis Mona” deployed and the band seemed actually to get in the mood, but by the very bad singing, this song was a true disappointment. Only the familiarity of the songs brought a meagre applause triggered. After that they played “Thousand Fold” the first nice song was, but then, just one song later their performance ended.
Instruments sounded perfect, but the quality of the singing and especially the disinterest of the band members made this act couldn’t possibly get any points Hope I will never ever see them or any other band doing such a thing again.
Score: 0/10

Saltatio Mortis
Following this wide range of bands, the German Saltatio Mortis climbs the stage, they may close the festival. And they do it in a dignified 105 minutes lasting show. The performance was beyond fantastic. If you like this band, you get value for money, it sounds live just like on the CD. Perfect performance, where the audience goes completely insane. Virtually all known songs were played and the audience was very pleased. Great!
There was a guest-appearance for singer Doro and two gentlemen of Feuerschwanz.
Score: 10/10