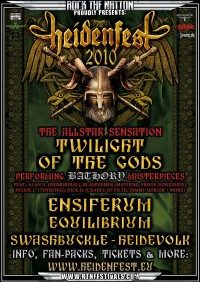 It’s time for the Heidenfest tour again, the tour visits the Netherlands as well this year and we decide to visit the tour in our own country this year.
Rock the Nation has managed to put down a nice line-up this year again, I just do not quite understand the headliner. The other bands on the contrary are very tasty.

Heidevolk
For those who still did not notice Heidevolk is not an little unknown band any more, the band is programmed on this Heidenfest tour. Why on earth as opener I wonder. The band immediately sounds solid as a rock. In the first song the sound has to be adjusted a little, but that is difficult when you are standing right in front of an almost full house (a hall that would be completely full a short while later). It’s a great show which begins with ‘Nehalennia’ and then all the “hits” follow in a rapid pace, to end up with ‘Vulgaris Magistralis. The audience was very enthusiastic and the crowd was deeply involved. Superb!
Score: 8/10

Swashbuckle
The second band of the evening Swashbuckle. Well, what can you say about it, it’s not for everyone, but if you love it… But one thing is for sure with this band, where they are there’s a party. They demanded a lot of the audience: lots of pits, stagedives etc. The pits did not really get started, but stage-diving a popular way to pass the time for the rest of the evening. Maybe not that pagan, but it is fest.
Score: 7/10

Equilibrium
Also Equilibrium proves tonight they’re able to put on a good performance without Helge. A little disappointment for me remains the use of lots of samples, but besides that is a great performance.
Score: 7/10

Ensiferum
For me personally, the main act of the evening was Ensiferum. For to me still incomprehensible reasons they had Twilight of the Gods programmed as a headliner, it will have served for promotional purposes. To me Rock the Nation should have left TofG out an replace them with another band, I think more people were of this opinion, regarding the large number of people who left the venue after Ensiferum.
The gig of the Finns was as solid as a rock as well, what an performance … In one word: Fabulous.
Score: 10/10

Twilight of the Gods
A lot of people have left the venue when Twilight of the Gods starts, and this goes on during their performance. Only a small group of fanatics remains in front of the stage and they seem to enjoy themselves a lot. But the band doesn’t manage to get the attention of a large part of the spectators.