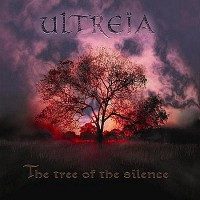 Ultreia is a Spanish band which produces their own albums. They are also downloadable form their website.
‘The Tree of the Silence’ is their second album. It begins with the track ‘Civil War’, a song which is sung with much empathy The music seems to stay in the background a bit, but the whistles sound very nice in this track.
And the next song also about war, this time the old city Numancia in the Northern part of Spain is the subject. The song is somewhat grim and has nice bagpipe-tunes.
‘Sacred Earth’ starts of with a nice bagpipe like we heard before. A nice solid rocksong. Don’t expect a lot of metal form this Spanish band. It’s a nice and solid rocksound, interspersed with whistle and bagpipe, which gives it a nice folky catch.
In ‘Birdy’ we get our share of folk-melodies by a flute, and this sounds also nice, and by now we get a grip on the typical sounds of the band. I’m getting to like this album, despite of the fact it good be better produced at some points.
The very nice and easy starting song ‘Ainielle’ starts with a agitated flute and a beautiful agitated voice is joining in, nicely done. A nice composition which gets quite solid later on.
And then there’s the track ‘Ultreia’, somewhat faster then the rest of the tracks, nice.
The band shows another face in ‘Badde Calàvrigu’, with a beautiful ancient kind of singing, which brings you a few hundred years back in time. A beautiful track in which the band shows they have a lot to offer.
Right after this is the ‘Tercer Mundo’ a quite catchy song, but also this sounds nice. The album has picked up quality and becomes very nice. These last tracks form a very nice spot in this album.
And the song ‘Dreams of God’ could have fit in this, but it sounds all smooth in the whole song. A pity because this is also a nice track. The piece in the end where flute and vocal join together is simply gorgeous.
In ‘Sisifo’ the band shows they can produce metal too, the female voices stay clean, and that’s one of the main characteristics of Ultreias’ sound.
‘Wolf’ has this beautiful intro by acoustic guitar, joined by flutes. And when you think, does it all sound right, the vocals start and it seems to be meant this way. But there are some other irregularities in the rest of the track. The track is nicely build up although and know some heave and quieter elements.
The album is finished with a nice folkloric piece ‘A Santa Compaña’, nice bagpipes and drums, you just want to taste more of this.

In short ‘The Tree of the Silence’ is an nice album. It needs a good producer to get out the little irregularities every here and there, which are bringing some tracks down a bit. The band is quite creative and has shown a lot of nice stuff with this album.