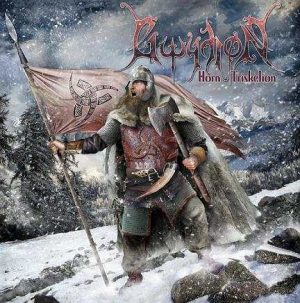 I wasn’t very interested in Gwydion until now. In the past I had listened to a few songs and the gig in Arnhem in 2008 confirmed my opinion it wasn’t all very strong.
But… , sometimes you experience things in life…
Folk-metal.nl got with some other folk-metal albums also Gwydions most recent album “Horn Triskelion”, and I should shame myself, I had never made the effort to listen this one until now.
The opening of the album is beautiful, but after this the band reveals how varied they really are. At last, all the pieces fall into place with this band. You’ll find very beautiful balanced songs on this album. They go easily from quieter atmospheric pieces to raw metalones. Every folk-metalfan will enjoy a song as “From Hel to Asgard”, delicious track which has it all, atmosphere, battle and the opportunity to shout along. With Oflussa the band shows metal can has a lot of atmosphere to go on with “Mead of Poetry” which is much more the music which reminds you of bands like Alestorm. And seamless to “Triskelion Horde is Nigh” with bagpipes which remind you of Skiltron. In “At the Sumbel” the band shows they handle pure folk as well. And so the whole album goes on with nice stuff.
The only small negative point is it’s all very diverse. It are all good songs, but it would have been nicer if they sticked more to a red thread in the album. But one thing I know for sure: I going to listen to this a hell of a lot more.