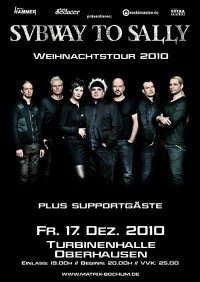 We travelled through heavy winterweather to the Eisheilige Nacht tour of Subway to Sally. Due to the fact Subway to Sally experienced some serious weather on their way and were delayed a bit, both supporting band played in another room in the same venue. Dunkelschon disappointed a bit, the cd’s sound a lot better. Copelliusis just a band you have to see once.

Subway to Sally
Half an hour later then scheduled Subway to Sally started their set. I was quite familiar with their acoustic ‘Nackt’ DVD’s, and then such a rockshow is quite a different. The band gave a way an about 90 minutes lasting fabulous show. A chain of their most famous songs came along, the band has such a lot great songs, they have to make a selection. And where the snow is falling down in one song, the stage changes in an inferno in the song ‘Feuerland’. Fireballs and spitting flames are making some people give up their spot in front because of the heat.
A beautiful quite spot in the show is ‘Maria’, a song which is done with only guitar and vocals.
Score: 7/10