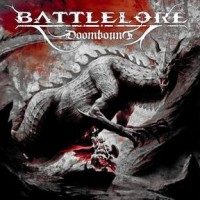 A new album of these Finns, I’m curious, because although I am a fan of these survivors from Tolkien’s Middle Earth, I must also confess that I do not think all the songs equally stunning. They don’t have a top album yet in my opinion. Each album has stunning songs as ‘Sons of Riddermark’ and ‘Ghan of the Woods’, but every album also has some less interesting songs. So what will it be this time.
This is again an album that you should listen to several times, just like with the previous one. The accessible tunes that characterizes many of their top songs are missing on this album, just like on its predecessor. Is there something new under the sun? Yes, this is the first concept album of the band, something which fits well in the narrative way the lyrics of the band have always been built in.
This is again an album inspired by Tolkien’s book The Children of Hurin. The first issue ‘Bloodstained’ reminds you immediately of songs from “The Last Alliance”. A feeling which continues, even in the cinematic ‘Bow and Helm’. The enchanting song ‘Enchanted’ is a wonderfully beautiful quiet song, something I do not is the strongest side of the band most of the time. ‘Karmessurma’ is a delightful sing-along, if I could only speak Finnish …
The keyboards are more present all over the album more than we’re used to, something is noticed very well in a song like ‘Men As Wolves’. The music here is very cinematic, it is difficult not to see a movie playing before your eyes, when you close them. During the “credits” we are treated to an instrumental slot-song.
Although it is not Battlelore’s best album, in particular by the lack of real hits among these songs, it’s not a bad album at all. The concept experiment is in my view well managed and certainly serve the fans of “The Last Alliance”.