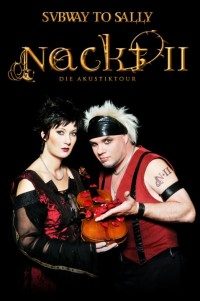 Subway to Sally with their second acoustic tour in Munster (Germany). I feel I have to explain two things:
1. Why wasn’t this concert in the eventcalendar of Folk-metal.nl? The answer is: in 2011 we draw a line at about an hour drive over the Dutch/German border. Munster is just outside this, but I thought it would be worth a drive of about 1 1/2 hour.
2. Does this belong at Folk-metal.nl? It’s always an issue to establish what belongs on the site and what doesn’t. When there are some doubts, often the use of authentic instruments make the difference. The solid medieval rock, like a lot of German bands play, is at Folk-metal.nl for that reason. When we would be narrow-minded, we should exclude Subway to Sally’s Nackt tour, because this isn’t as solid as they usually play. But since this is something done by a band featured on Folk-metal.nl we pick this one up as well.

After they made the Nackt tour a success, Subway to Sally decided to give it a follow up. They made a brand new setlist and reworked those songs to play them acoustic. A brilliant piece of work, even more when you take into account they didn’t use a single song of their first Nackt tour.
Even more special to me, I already new the setlist and the setting on the stage. After the first concerts of this tour StS released a DVD of this tour, which I had played for many, many hours.
For those who know the DVD already, this is exactly what you get. For those who don’t know the DVD. You can sit down and listen to this music. The venue is full of chairs, like a theatre and the songs are great to listen to sitting down. The stage is basically one giant tree with big roots, which are above the surface. The band had two guest-players for this special tour, B-Deutung on cello and Nora on percussion. She takes a seat on one of the roots of the tree and sits there most of the evening.
The show starts with a quiet intro on percussion. In the meanwhile the band takes place and brings us beautiful versions of ‘Henkersbraut’, ‘die Rose im Wasser’, ‘Eisblumen’, ‘Angelus’ to name just a few. The sound and skillfull use of the instruments is perfect. You are touched the whole evening by beautiful melodies, merry tunes and awesome close harmony. The role of the guest-players is soon very clear, with the cello the warm, melancholic undertone in the music is layed down and the percussion is multidimensional on a limited number of instruments and is indispensable for the presentation of these songs.

The audience is very enthousiastic and after 90 minutes they can’t restrain themselves any longer and lots of fans stand up en move with the music. Only after 105 minutes the band stops.
The audience is shouting:
Blut, Blut Rauber saufen Blut
Raub und Mord und uberfall sind gut
hoch vom Galgen klingt es
hoch vom Galgen klingt es
Raub und Mord und uberfall sind gut!
This makes the band return to treat the whole venue on another three songs, among which of course “Sieben”, but after this the audience still isn’t done with the band and again the play three encores, and the audience is finally satisfied when “Julia und die Rauber” is played.

In short, a fantastic concert. Do you love more they only bang your head and can you appreciate this kind of acoustic stuff, then my advice is simple: go and see them on this acoustic tour, because you surely don’t want to miss out.
Score: 10/10