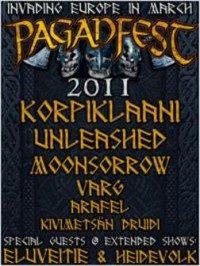 Wow! What a lineup, paganfest has in store this year. By far the best since 2008, when I first went to this annual tour. When we entered the venue, we received a fistful leaflets and even a cd with several recently released or soon to be folk-metal songs from various bands. I bought (tradition) a pagan fest T-shirt. We thought it right after the first band, Obscurity, to bring this stuff back to our car. Nope, no re-entry today. Difficult, but also a strange rule. Anyway, the music …. the lineup is obviously known, but in Oberhausen we got to enjoy three little extra’s, but hey, “little …???”

Obscurity
German Obscurity kicked off, a rough sound, a lot of enthusiastic Germans and a big moshpit … continue the music could not touch me as well, but certainly a nice opener, but definitely not my favorite act.

Kivimetsän Druidi
After half an hour the stage was for a band which certainly is part of my favorites, Kivimetsän Druidi. Unfortunately, I became disappointed soon, the sound-engineer was fiddling about caused a sound which could appeeal, one after another guitars and vocals fell out of the mix or something was too loud or too shrill. Too bad, I’ve seen these Finns twice already and they’re able to put down a strong performance, especially too bad, because this was not their fault.
Score: 6/10

Arafel
After the Druids was the turn of the German / Israeli Arafel, the only one of the bands that I had never seen live so I was very curious. But again, the lords of the sound was not quite awake and here he managed to loose the guitar, violin and vocals regularly. Despite all this it was a great act that really reached the audience. After half an hour Arafel left, accompanied by a loud “Zugabe” (we want more) and it was time for the second extended band.
Score: 6/10

Heidevolk
Our own Heidevolk from the Dutch region Gelderland took off. Heidevolk is, as well known perhaps, very popular in Germany and it was therefore obvious, the Germans were singing (even though they had no idea what they were singing) and the atmosphere was very good. I can say very little more about this act, it is known that these men always give a nice show, but this exceeded all, amazingly good! The few Dutch certainly had reason to be proud.
Score: 10/10

Varg
‘Wir sind die Wulfe’ (we are the wolves), that’s obvious. Varg, a pair of wolf addict Germans with red/black faces, painted bodies and irrepressible thirst for blood. Almost all of their better songs were played and particularly multiple songs from the newly released album “Wolfskult”. Also nice was Vargs new song, this was about the famous tale of Little Red Riding Hood. For the song Little Red Riding Hood also came to the stage with its hurdy-gurdy, unfortunately this was not to be heard (thanks soundman). The lyrics itself I could not understand very well, but it seemed that Little Red Riding Hood (Anna Murphy Eluveitie), had managed to seduce the wolf this time and lured him into a mercilessly slaughter. After a series of brutal murders and flying limbs it was time for the next Finnish band.
Score: 10/10

Moonsorrow
This next Finnish band, is not just ‘a’ band, but my personal favorite, MoonsorroW. After some problems with the guitar during the soundcheck (which lasted very long) this bloodied Finns entered the stage. The music is not suitable for pits and headbanging is hardly relevant, but this music gets into you, it goes through your whole body as a kind of trance. Really brilliant play! Another tidbit, the last time Moonsorrow in Oberhausen played the bass guitar was stolen from Ville, they dedicated a song to this thief. Because he obviously wanted a slow and very painful death, Kivenkantaja.
Score: 10/10

After Moonsorrow it was dinner time, or so I thought, thanks no re-entry rule. We were not allowed out of the building to get some food, there was one foodstand inside in the central part of the building near to the merchandise, but my god, they were all out of buns very soon. Fortunately, they came (after a while) with casino-bread. So the hefty bratwurst on a bun was small, but it was all there was. And it took awfully long to warm the sausages….

Unleashed
When we were ready, Unleashed had already started, we missed some half line (and every song is about a line of text or something) as simple as two years ago, few difficult instrumental stuff and lyrics, a four year old can scream along. The men stand strong on stage and do have charisma, that has to be said.

Korpiklaani
After this silly work it was time for celebration, and that in the Korpiklaani-way. A strange tracklist for the last Finnish band tonight. Despite Vodka, Tequila, Beer Beer, Wooden Pints ​​and Journey Man, there was a lot of space for unknown songs and even a cover of Motorhead. Because of the unknown songs, the mood was not as festive as usual but for me personally it was all the better, all the party songs I’ve heard often enough by now.
Score: 10/10

Eluveitie
Finally, the last “bonus”, Eluveitie. An action which can be summarized very briefly, simply perfect. What an act, I was able to see the Swiss on several occasions, and it is basically always good (besides at Burgfolk) but WOW this is really super. The gradually becoming tired audience went completely insane and the men and women on stage were looking forward to it. Songs like Inis Mona, Thousandfold, (do)minion and Kingdom come undone were played and for dessert we got, after some nagging to “Zugaben” (we want more) also got to hear Tegernakô.
Again a very successful pagan fest edition and an eventful Saturday. Too bad we have to wait another year for the next edition.
Score: 10/10