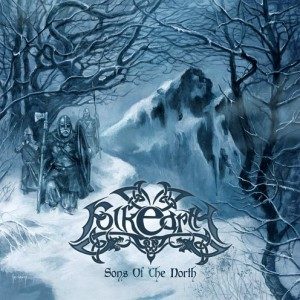 In 2011 Folkearth releases two albums. Folkearth is an international project in which a large number of musicians from all kind of folk-metal and vikingbands participate. Recently we found both albums on our mailbox so we spent a few hours on this albums to listen somewhat better to them.
‘Sons of North’ is the first album Folkearth released in 2011, but they released a large number of albums in the years before. The album starts with the titletrack ‘Sons of North’, we get an solid vikingtrack as a starter, speedy guitars a track with the motto ‘a good start is half the battle’.
‘Rider on the Winds’ also has nice guitars. While other Folkearth albums sound like a compilation, you notice these tracks are more a unity.
Folkearth has a lot of participating musicians and also multiple vocalists. The vocals in ‘Taking Arms’ are not everywhere at their best. A pity because this is a nice track with merry flutes, female vocals and multiple male vocals. The vocals give me a ‘Young Ones – living doll’ feeling a bit.
Fortunately ‘Lord of Serpents’ sounds a lot better, again we have male and female vocals en nice guitars. ‘Ravens on Wing’ is a similar fine song with a bigger role for the accordion.
But I think ‘Odin wills it’ is the best track of this album. Nice guitars and good brute vocals which sound perfectly in this song.

In short, this is a good album by Folkearth, but they have made better ones. The album sounds less like compilation, although it can be heard there were a lot of musicians involved it has more coherence. Some of the vocals are not always as nice as they could be and also the production can be better as we can hear on the Folkodia album of 2012, which is much better.
The guitars on ‘Sons of North’ make the album worthwhile ‘though.