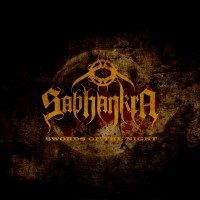 This record is a bit older (2011) but we received it recently to review. And I’ll do this with pleasure. Sabhankra is a folk-metal band from Istanbul, not a spot where you expect a folk-metal band. Sabhankra is therefore a band which does everything a little bit in a different way. In 2006 they released a full-length, in 2007 a live-dvd and after this three EP’s. Most of the bands do these kind of things in a different order.
Swords of the Night contains only four track, but the first one is good for eight and a half minute. The others are more moderate with three to five minutes.
But the first songs impresses at once with an epic intro of synths followed by a tight guitar and drums. The mixing on the other hand could have been done better. Besides the fact the guitars and drums, it sounds all a bit choppy.
The guitar-riffs are a bit minimalistic, er could be some more variation it it, especially in It’s All a Lie. Halfway the song there’s a guitar-solo, but in the rest of the songs there’s only an, eventually annoying, rhythm guitar.
The vocals sound good, but there sometimes a bit flat and sound to far away, this is again a mixing-problem.
With the last song we get all a sudden some computing-like synths. The melody and guitars sound very nice, a pity the synths don’t sound a bit more realistic. The lack of vocals isn’t bad at all and it makes you feel you’re waiting for violent burst out. And then suddenly the track has ended. A pity because Sabhankra could have done more with this track.
Just like they could have done more with this album. I think Sabhankra surely is talented, but they can’t give a good expression of this, surely not with this EP.