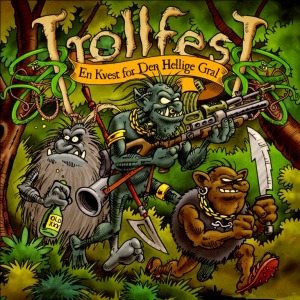 In their camp somewhere in the vast forest of Norway worked these trolls on a new plan, “And kvest for the hellige gral”, this means the trolls go in search of the holy grail.
Our journey begins with a very unpleasant incident, with “Verdammte hungersnot” (Bloody Starvation). What exactly they have to say about this damn famine I can not understand, because the lyrics in Norwegian and German are mixed together. Nothing new under the moon so far. Trollfest as we all already know, hard, rough, uncouth, potty but especially happy and drunk. After four minutes hungry it’s time to start the caraway, as long as my translation site says “Karve” caraway at least. Caraway, that does not really fill the stomach, but it tastes good. Hopefully the notorious gang from the next song, too. I think that no one needs a translation site for “Die Berüchtiges Bande”. I can imagine that this is a notorious gang. Drunken figures often cause much damage, which will roll still some extreme. “Gjetord” is the song that follows, no idea what it means but it sounds as Trollfest as the rest so the text is little else to do.
The Scapegoat’s mistakes? That is the best translation I can find for the next issue, but I think that’s not really interesting all … “Der Sündenbock Gegalte” is another semi-acoustic number that my knowledge on all albums somewhere between state, something without yelling and bang hard gerag guitar, but with an acoustic guitar and a trumpet. “Korstog” however, goes back further in the usual way.
“Undermålere” I was pleasantly surprised with this intro, not quite what I expected for the rest of the album but I think it’s always nice to hear nice intros in between. The rest of the song has to be completed in the old way, but that does not matter, a very good Trollfest number it is. “Jevnes med Jorden” is actually a remarkably serious song. Almost as if it was written sober. Later in the song revolves yet again, it was probably quite a boozed night while writing. “And rickety trollsti” is the last missing piece of our quest for the holy grail, the grail that they now finally have found is not clear because there is no Trollditional blow to understand. The liquor they found anyway and my smile too, lovely ending to a, for me, already very good album.
It is clear that the trolls have emptied the liquor cabinet, luckily they go later this year throughout Europe to fill it. Between the gigs at heidenfest they will they perhaps look into all the boxes, to see if there happen to be a Holy Grail hidden inside. Who knows these trolls are all historians outwit and they find him actually, but that chance does not seem that great. But who cares, Trollfest has a fantastic album twisted! Now just wait for Heidenfest.