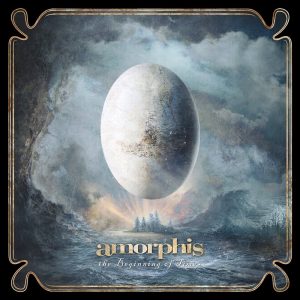 Three albums in three years. In The Beginning of Times Amorphis closes a truly beautiful triptych on the Kalevala. And members also prove that three albums in a short time is not at the expense of quality. The album starts with good Battle for light followed by Mermaid.
What is a good adapter for My Enemy and You I Need. Next in the album is also Song of the Sage worth. The album is more melodic than its predecessor but still pretty solid. The combination of grunts and clean vocals is not boring, on the contrary, it is very pleasant to the ear. Tomi Joutsen has real talent there for, how many singers out there that can both so good? Especially if it still comes to the singing. Not every issue of quality is that it really lingers and makes a wow impression but there are a few toppers between. Escape and Beginning of Time must certainly be called hence. Amorphis knows how to make a good combination between heavy songs and some more melodic songs. Where it can still be noticed how smooth it passes into another, not only within the track itself but the whole album sounds like a whole. In The Beginning of Times Amorphis proves again that you never stop talking about myths (broken chants) touches. But what more proof is that 19 years after the debut still can drop one hell of an album. Though it is perhaps the last point, right about time to go in another direction. How good and beautiful, this concept may sound as a musician must develop you remain yourself. Certainly at a time when the crack of musicians. You must ensure that you stand out. And though I’m so awfully excited about this album is it is still standard.