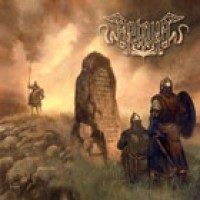 On the previous album “Stenka after Stenku” I wrote, not so long ago: “Aren’t you quite satisfied with this album, it is just an EP and probably the next real album is again wonderful folk-metal as ever?”. And I was right. This time I can talk about Slovo, and indeed, Masha is good again, she grunting nicely and the guitar is again a nice bit harder. ‘Az’ is the intro, and it sounds very obscure, ‘Arkaim’ is a perfect follow up of that song, and you will hear the old Arkona again, in the very nice slow middle section they built further on ‘Az’ and the great Slavic bagpipe sounds again through your room.
The song is ending and Arkona again shows what they stand for. Still, the first song was not nearly as hard as “Goi, Rode, Goi” or “Ot serdtsa k nebu” what still are the best songs for me. Also “Bol’no mne” does not provide this, it belongs more in the line sensitive songs of which Arkona has made quite a number of. “Leshiy” is a nice happy song, but on the bright hard Arkona way of joy. “Predok” is a nice story, but my Russian is extremely lousy so I have no further idea. The album is generally a very different direction beaten if you compare it with the previous full-length album “Goi, Rode, Goi”. This time the Russians most certainly have chosen a solid path, but for the biggest part of this album, they go on the sensitive side. Listening to this album you will therefore regularly close your eyes. The atmosphere of the place is reminiscent of a song like “Pamiat” that “Goi, Rode, Goi” had already appeared. However Arkona apparently could also not resist to put “Stenka after Stenku” on this CD, both of the cheerful variety. But I still think: “this was not necessary on this CD.”
“Zimushka” is the closing track of the CD, a song which gives a feeling as “Rus”. For me a very appropriate valve on a good album. Arkona proved me right, “Stenka after Stenku” was indeed a nice job in between, “Slovo” still gives the old Arkona feeling back. Although it is totally different from the previous works which were hard, with Slavic folk. For Arkona fans, certainly a good album that does not look bad at all in your CD rack, even for fans of the delicate folk-metal parts this is a recommended album. Are you still out on brute and raw violence? Yes?, in that case it may be quite disappointing.