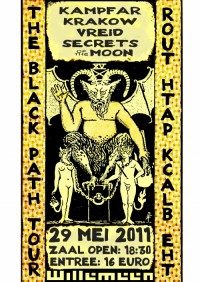 Not really knowing what to expect, I looked forward to this concert. Yes, Kampfar is awesome, I’d already seen them live and I thought it was really great. Yes, Vreid is very fat, although it’s not entirely my piece of cake. The rest, honestly I don’t know, Krakow and Secrets of the Moon. All black metal.

Still, I’m looking forward to the evening. Willemeen, I’ve never been there before. A bit strange this venue, the shape and layout are not quite ideal, but still… I’m looking at the stage, it’s empty, just a lot of smoke and I go on with my conversation. A moment later I turn around and suddenly, the first band is there, no one seemed to notice this. The rest of Secrets of the Moon was rather an annoying interruption of my conversation then a great performance. Once the music was soft enough people talked quietly to each other.
Vreid, yes, I felt great when I played this at home, it is also a band with quite a name so I had pretty high expectations of them. The guys came in and it was solid as a rock from the moment they started. They played three songs, including my personal favourite “I Krig”, after these three songs the performance suddenly went down the hill, and it became ‘just a band’. Fortunately, they closed their set with other favourite, “Pitch Black.”
After Vreid I went outside for a moment, it was terribly hot in the venue, back in the hall, Krakow had already began playing, the first act which really managed the take the audience along with them. These gentlemen and lady just stood on the stage as they supposed too, with a charisma that can not be blown away. They had brought a great candle, but this couldn’t really be noticed behind the singer. They played a song from the album where they currently are working on, it had an extremely catchy title of seven words or so, unfortunately, I’ve forgotten…, actually I’d forgotten it at once, and I don’t think there was someone in the venue who really understood what they were saying.

Finally it was time for Kampfar. They opened strong with the very cool song ‘Valgalderkvad’, followed by ‘Mare’. Ask, the drummer was completely in smoke, but he did the 2nd voice, what seemed to be just a sample until the smoke was blown away. Kampfar gave a show like I like from them. A perfect sound and a perfect blend of old and new songs. The performance continued at a high level until the very last note, and when they played ‘Blitz Witch’ of the new album somewhere at the end of their set, they couldn’t do anything wrong for me any more. And by ending with “Raven Heart’ they made themselves immortal to me.