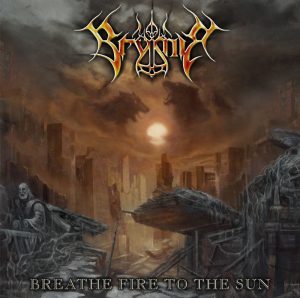 Earning a record-deal with Spinefarm Records, by winning a band-battle, gave Brymir the opportunity some time ago to release the debut album “Breath fire to the sun”. However, for a reason unknown to us, this never reached us, until now! Obviously I have long heard the album and many of the readers, right? Then you’re not doing well. During my holidays I often sit still listening. Intro, a very impressive name for an intro, but it is beautiful. A slow build slowly working towards the first real song, “Unconquerable” which is appropriate when you consider that this is only a debut album! It is reminiscent of bands like Wintersun, Ensiferum and the old work of Turisas. Brymir retrieves all of the best and combines it. For “In Silence” is that the numbers both bombastic as sensitive, and both rough and refined, which of course are clever combinations. Another thing that is handsome, despite that there are so many different elements, is it not chaos or bulk and weight. The vocals are mostly grunt, but also there is place for almost bright pieces and for singing. The folk become disposed in the whole by a keyboard and by the texts. The guitar riffs are clearly inspired by folk-metal than other metal genres. Personally, I think “Free man’s path” the most beautiful text, from slave to freedom from misery to happiness. Which actually is the subject of the entire CD. In “Withering fits” you hear lyrically most folk, “The wind still whispers our forefathers’ chants. The ground still trampled by Their dance”. A number of the nations of the past, what they failed, their history, and that we must never forget them. Brymir approached the folk in a very different way than most bands, where most empathize with the time of their ancestors Brymir think back to their deeds, and they never forget allowed to touch, from a contemporary experience. Before you’re through you’re already five minutes to listen and you hear a slow keyboard with rain sounds, Breath fire to the sun, the title track and also ending to what me really a great CD! Brymir, especially guests that have to be taken into account. As for me really a great CD, I am curious how this will go when they make another one. I do think this is an album that can be appreciated by everyone. It contains something new (which has some bands gradually on). A piece like this in your CD rack would be nice, and believe me, you put him more often than you think in advance. Personally I am very curious about the live gigs of these guys.