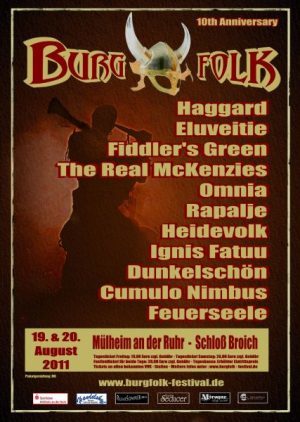 Cumulo Nimbus
We’ve got a nice rest and very good breakfast, and then it’s time to got to the castle, we parked the car, I attached some armour plating and we’re ready to go inside.
We’re staying in the shadow for awhile on this warm day and then the first band of today kicks off. It’s the German Cumulo Nimbus, playing a mix of Medieval, rock, renaissance and a whiff of metal. With an opener like ‘Carpe Noctem’ you immediately create a nice atmosphere on the courtyard and the audience reacted at once on the nice work by the band. They guitar-player is strolling around with a big smile and seems to have a lot of fun at what their doing, while the singer keeps standing still in his long coat and high hat. Nice outfits, which were obviously given some thought. After picking a lot of night the set seems to slowly fade away with two somewhat slower songs, but after this the band takes a firm grasp on itself and they play some very strong and catchy material for us. I’m not joing when I say I found it a pity their time was up, this was really nice! This is highly recommended for the people who don’t like just metal, but the more merry work also.
Score: 8/10

Dunkelschön
Then it was time for Dunkelschön, despite the fact they played their songs very well, they had a hard time to get a good connection with the audience, causing a somewhat tempered audience.

Ignis Fatuu
When Dunkelschön left it was time for one of the favourites of the audience, this became clear during the soundcheck of Ignis Fatuu. You play a little piece of bagpipe and you sing a piece of the beautiful song ‘Stille Wasser’ and you’ve conquered the audience even before you’re really started. But when they took off with their first song the audience wasn’t that enthusiastic. It took a little while but then the audience hit it off and it didn’t matter what happened, their was a very strong bond between the band and the audience and there was a lot of laughter at both sides. They played all their strong catchy songs, but also the sensitive ones like ‘Wolfszeit’ and ‘Stille Wasser’. Finally the audience get to form a ‘beautiful’ orchestra in ‘Spiel des Lebens’: Oh oh oh oh! And when you stay clapping and shouting ‘oh oh oh oh!’ in the requested rhythm when the band is long gone, they have to come back to play en encore.
Score: 10/10

Omnia
Omnia is suddenly very much more quiet compared to the previous bands, but that doesn’t mean automatically they’re not as good. Omnia is also a Dutch band which is very popular in Germany. They play a whole lot of very nice songs and besides the ‘rap’ piece you’ll never get bored.

The Real McKenzies
The real McKenzies, another act I definitely wanted to see. But unfortunately I was outside drinking a little and I came in late. But with a little effort, I managed to get a lot closer to the stage. And then when you can’t get any further there was this moshpit. A title consideration, a moshpit on Roman Sandals isn’t really nice, but I joined in. With hurting feet I got to the other side close to the fence, to get a really good look on what these Canadians punks had in mind for us. They mainly wanted to point out one thing: “You all are bastards! And if not, you are now!” They had everybody going from the beginning and a huge moshpit was the result. A pity the sound was quite bad. But they know how to build a party. And for all mothers a warning, the biggest mistake you can make, is to let your son play in a rockband, regarding to Paul McKenzie (the singer) this is. They told us they had had enough of this gig and of the whole summertour and they wanted to let us know this by playing “BUGGER OFF! YOU BASTARDS BUGGER OFF! FUCK YOU!” a nice sing-along and a nice end to their show.
Score: 8/10

Fiddler’s Green
After a beer I had to go to the front-area, because for me Fiddlers Green was the main event of the day. I empty my horn and some freak with an ugly head of a ram and a weird drum jumps on stage. After this a couple of guys in neat shirts and ties, and the party can get started. When there are some of you who don’t know Fiddlers Green, it’s a kind of Floggin’ Molly but a little quieter. The gentlemen are here to party and are not afraid of being a big ass on stage, with funny steps and funny faces they get the whole audience in a mosh. It’s all very cosy. Nice they played ‘Raggle taggle gypsy’ just like Rapalje did the day before. The highlight of their gig was with ‘The Rocky Road to Dublin’, in which the wall of death gets a new variety. Everybody goes to the side and on the count of 3 you get to the other side. Of course singer Ralf Albers plays along also. According to me an fabulous gig, even in the beautiful sensitive songs like “Rose in the Heather”.
Score: 10/10

Haggard
After this it’s time for Haggard, but like always, they’re very busy creating a whole village on stage an a lot of annoying activities with all instruments where the director himself has to come and watch every time. When they’ re not playing after 45 minutes there getting some people in the audience very annoyed. When somebody in the audience gets to play a random tune on a small flute, the audience gets even excited, one person in the audience is responsible for an entire crowd singing lalala and clapping along, He gets a big applause after his performance and out of pure boredom I would give this guy 5 points for his gig. Beside us somebody shouts “Heute noch?” (Do we get there today?), and after waiting for an whole hour we give up. This isn’t one of the bands we were coming for, it’s awesome you can perform with such a lot of instruments. But the conclusion which we draw after an hour: it can’t be done.
It’s a little disappointment a fabulous weekend has to end this way, but it won’t trouble my recollection of Burgfolk 2011. It remains a very nice festival!