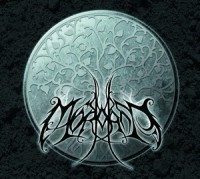 After two demo’s Morhana made a debut-EP called Morhana in 2011. On this EP are 4 tracks which weren’t on the earlier recorded demo’s.
This EP’s starts with a fine intro with a nice violin in it. When the vocals start in I thought for one moment my player had switched to Amorphis, but this thought is instantly swept away by nice flute and violin sounds. A very nice track this first one Horned God, it reminds a bit of a band like Amorphis, but there’s a lot more folk added to it, which gives it a distinctive sound of their own.
The next track WTF is another nice one. The title is indeed what you think at first. Even now when I’ve heard this song a lot of times I’m not sure what to think of it. Somehow I’m not very fond of the male vocals in this one. The lyrics aren’t the brightest ones either but the music is fabulous. The folk sounds and the typical Slavic screams gives it all a very nice touch.
Dreamland starts of rather massive with the guitars, but when the violin joins in, it becomes less massive. This is a track with female vocals and they’re not bad either, but they’re at their best in the refrain. This refrain is by the way a rather sticky one, It was still in my head when I woke up this morning.
The last track is the only one with a Polish title, and I don’t know why, Strzyga is the Polish word for Vampire. And it’s a beautiful word, but the lyrics are, just like all the lyrics, in English. A somewhat slower song this is. And despite of the fact there are again nice flutes and violin in it, it’s less folky. But this doesn’t mean it isn’t a nice song.

Morhana used clear vocals and this is a good choice, the music doesn’t reach the far corners of raging guitars and screaming vocals, but it’s a more sophisticated blend of metal and Slavonic folk. The male vocals are very pleasant and the female vocals are nice in the traditional parts and in the refrain of Dreamland. The way the flutes and violin is fit in the music is very nice. I can understand not everyone likes the Slavonic folk as much as I do, but with Morhana this is blended in a way I think everyone likes it.
A very nice début by Morhana, it’s about time they release a full length…