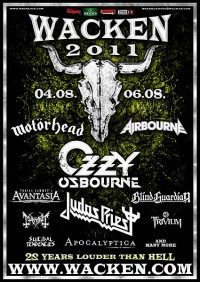 Wacken… Every self-respecting metalhead knows this festival. Standard on the first weekend of August attract some 90,000 men from all over the world set out to go to ‘The Holy Wacken Land’ for three days of celebration, drink and of course Metal! At the festival is so much to see and do too much than is possible in three days! The folk lovers are not forgotten with about 15 folk bands and Wackinger Village. Below is the report from Wacken, with a brief description of all relevant performances.

Wackinger Village
Uniquely for a metal festival is Wackinger Village. A complete village area decorated with medieval tents, food stalls, and vendor booths. There is also a stage and a large meadow where fire shows, sword fighting and medieval pots football locally. In this village was also able to get fellow, eat authentic food and let you shave the old fashioned way. Wackinger Village is an ideal opportunity to relax after the metal violence. It’s very atmospheric and with the sounds of the smaller folk (metal) groups a pleasant way to pass your festival!

Reliquiae
Reliquiae was one of the first bands that could kick off in the 22nd edition of the Wacken Open Air. The day before Wacken really starts because there is a standard pre-party with three smaller folk (metal) bands. Very cosy and always a nice way to start a festival. Because we were late on the festival grounds Reliquiae was the first band that I would see. Although she still un-amplified year, unplanned occurred for the stands, they had this year a place on the podium Wackinger managed to secure. This was only right if you saw the rise coming at this band! One hour was played lively folk, where the audience gratefully made use of it by jumping, pips and party. Also, even were the first crowd surfers Wacken already a fact. All in all a nice entrant, only a pity that the drums and the bass too loud in the mix were to really be able to fully enjoy the performance.

The Aberlours
The Aberlours was a band that I did not know in advance. They proved to Irish folk as well Flogging Molly therefore known. And as always in these bands can not fail to be partying! Everyone jumped, everyone danced, and because of the drought was severe dust clouds. Also a huge polonaise (started by yours truly!) Circled happily through the crowd. The band played well and enthusiastic, just the pace was quite gutted by a lengthy drum solo. The drum was also too much too loud in the mix, making it an unpleasant idea. All in all, not special, but fun.

Ensiferum
Ensiferum you already know exactly what you can expect from their show. Incredibly energetic band members who clearly feel like it and frankly a great performance. Still, there were some surprises in this show. Ensiferum namely almost never plays the same set list, and that was again the case this time. As the biggest surprises were “Tale of Revenge ‘and’ Victory Songs’ again dug up, songs that were already not played for a while. The band played energetic, and was clearly excited. Despite the rather early hour (12.00 pm) the audience was massively flocked to join this band to make a party of it. And it worked! Many party people, great pits and even a number of crowd surfers graced the audience. More words need not be made of dirt. Ensiferum was on a roll, and put a perfect show!
Score: 10/10

Ignis Fatuu
German folk as they should be, which is a brief summary of the music of Ignis Fatuu. All cliché elements they contain, from sing-along choruses, to typical German vocals to the use of traditional instruments with emphasis on various flutes. In all, Ignis Fatuu for a great party, with songs like ‘Drachenreiter “and” Wächter der night’ as the ultimate highlights. There was even publicly called for a wall of death, which eventually took place several times. The band started well, with some solid numbers. Halfway through the performance, however, slumped terribly in, with slow, totally catchy songs. This is very unfortunate was obviously speaks for itself, but also that many people ran away in this quiet spacer was unfortunate. After this long, surely boring piece in the setlist, the band took revenge by playing all squatters in succession at one time. Although this was very nice, was a little more variety in the set have been very welcome!
Score: 6/10

Suidakra
When a word was typical for the show Suidakra then it was ‘short’. This band had in fact but a scandalous 30 minutes to show their skills to the public. Fortunately, the band kept in mind and they played a set of encroaching variety. There was even a little surprise in the form of Tina Stabel who live the song ‘Birog’s Oath’ sang. Furthermore, songs from the new album interspersed with some older work. The band was obviously looking forward to, and did their very best as much as possible to cram too short set. Great show, just too short!
Score: 3/5

Saltatio Mortis
The seven of Saltatio Mortis had the honor to close the second day of the festival. This band played a slightly stronger version of the typical German folk. A very nice performance, again with an enthusiastic band. As a surprise came ‘The Metal Queen Doro Pesch along to sing one song, very nice! Furthermore, this action consisted of little surprises, the band played solid and the atmosphere was good. A nice touch was that the singer halfway through a song by crowd surfing went public, and he just kept on singing. All in all a good performance, but hardly surprising. Considering the music stand is very clear the live still just do not jump out among all the other bands. The little surprises in the activities were great fun and a nice addition!
Score: 6/10

Moonsorrow
Moonsorrow if, like Ensiferum the day before, start. Although they started at 12 am, there was already a fair amount of public crowded. The sound was great, and the band was obviously excited. Especially the guitarist was excited, and he also ran all the time back and forth across the stage, swinging his guitar around. Although the tire is quieter than the other bands in the same genre, this was the perfect opener for a day. Somewhat quiet start was exactly what many Wacken Ganger needed after a long night of partying. The opportunity was also seized gratefully, and beyond the requisite singing, headbanging and necessary hands in the air remained relatively quiet at this concert. All in all a good show, and so they arrived at Wacken better justice than among all the festivities a few months ago on Paganfest.
Score: 8/10

Eläkeläiset
I didn’t know really what to expect from Eläkeläiset. The band makes Humppa. Not like Finntroll Humppametal, no, think all metal from Finntroll way and what’s left is Eläkeläiset. Furthermore, this band knows professionally numbers include Nightwish, Queen and Nirvana ruin. Then the gig itself. The audience was, despite the pouring rain, massively crowded when Eläkeläiset kicked off. The band sat at a table, so it looked like there was a press conference. However, nothing was further from the truth. Within an hour all humppaversions of timeless classics were fired at the crowd. Despite the high humour content was excellent musicianship and the band was obviously excited. That the bond between the songs were barely understood by the heavy Finnish accent did not spoil the fun, and the crowd made a huge feast. Everywhere was danced and jumped. Also, were there many attempts to sing along with the Finnish-language text, which often amounted to belt out songs in the original text, or as hard and as much as possible, “Humppa” screaming (this latter approach also came dangerously close to the actual text that band sang!). A great performance by a band that was still a little out of place on the biggest metal festival in the world. Thanks to the high content of the music festival was however a big party, and would this band for me quite often at festivals scheduled may be!

Subway to Sally
The closing of the 22nd edition of Wacken Open Air this year Subway to Sally. This band also makes a typical form of the German folk. Since it was very late (the band just kicked off at 2pm), and because in the meantime started to rain very hard, I have only been given very little about this band. What I was given, however, was very good, the band played tight and was clearly excited. However, what was noticed was that the stage might be a little too big for a band like Subway to Sally. Although she called perfect which can make to end such a festival atmosphere was less than they would be on a small stage.
Score: 6/10