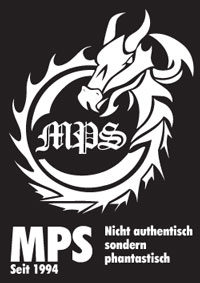 A special day for Folk-metal.nl, for the first time where doing two reviews at the same day. One reviewer is on the Elf Fantasy Fair today, and I’m attending the MPS, an event which is on my wish-list for year.
At last to the MPS, and I can tell you one thing already, next year I’m present again. And this is something that shouldn’t be hard. This Medieval Spectacle travels just on the other side of the German border with the Netherlands during the whole summer. With for instance festivals in Keulen, Borken, Weeze en Wassenberg, this is for a lot of Dutch people very nearby. The tour has even an Christmas-edition, so there’s also an alternative for the ones who like something different than the ordinary Christmas-market. During the nice stroll from the meadow which is transformed into a parking lot to the entrance, we already got a glimpse of the tents of the Medieval fellowships on the other side of the river. We counted quite a few, but when we entered the festival-ground this turned out to be only a little piece of the total festival. The Medieval camp-site was stretching for about 3 kilometres along the banks of the river. And although it was quiet around al lot of tents, there were warriors everywhere.

Just like at the Elf Fantasy Fair, al lot of visitors visit the event in style. So all around are people in linen shirts and other Medieval clothing. Beside a lot of fans who travelled quite a distance to visit this, there are also a lot of ‘curious’ people from nearby. On both ends of the terrain there is a stage where 2 band play alternately during the whole day. In this way each band gets to play 3 sessions. Around these stages there are a lot of stands with merchandise with for instance food, like a delicious meat skewers of a salmon which is locally smoked by a fire. But also, bracelets and necklaces and all kinds of Medieval assessments.
After visiting a very large piece of the festival-grounds we couldn’t find the second stage, later we found out, we had only visited a third of the grounds. When we discovered the other stage we also got to enjoy Schelmish.
It keeps me wondered why the Medieval times are so much more popular in Germany then they are with us Dutch. This festival is highly recommended to all fans of the Middle Ages and of nice somewhat different folkbands.

Schelmish
As said, after a long search we finally found the second stage, just in time to see a little piece of the Schelmish act. The weather is very nice and the mood is very high. The band plays very food and is obviously enjoying it.
Because we had decided to watch their evening-concert fully, we only say a piece of their second set. At the end of this there’s heavy rainfall, and the whole audience seeks shelter at the surrounding tables which are under over-roofed. The band stops playing, probably because of the weather.
At 18.00 hours we’re present for a whole gig, because of the weather we start under a tent at a little distance from the stage, but when they start, people gather from everywhere in front of the stage. Something which is highly appreciated by the band. The start with a number of beautiful fast songs. Their instruments for this event are all kinds of percussion, a large drum, bagpipes and flutes. The band enjoys playing again and treats us with a number of very nice songs and a huge amount of humour. Their explanation how to make a bagpipe out of a cat is very long, but hilarious also.
The crows requests songs with the hurdy-gurdy. And after a nice and quiet song which has to be played according to their frontman Dextro, because it is so beautiful, we get a large number of faster songs, at which the bagpipes are pounding though your entire body. This is the way Schelmish should sound, and I like it. A very good performance.
Score: 10/10

Rapalje
Just like all the other bands also Rapalje plays 3 sessions. They clearly point out they will use this to play a huge number of different songs.
At the end of the cloudy morning the band starts off their first session with an untitled song. During this song the sun comes out and the weather becomes very beautiful, the gentlemen decide to come off the stage and take place on a bench in the sun in front of the stage. A few songs later they take place on the stage again and we get to enjoy a large number of well-known songs.
A very nice gig of our fellow Dutchmen.

Saor Patrol
The surprise of the day in my opinion was Saor Patrol. These five Scottish men only use percussion in the shape of drums in all sizes, a guitar and a bagpipe. After the first song ended, I was curious if a singer should enter the stage, but the setting kept unchanged. But by using very compelling rhythms played on percussion and the guitar following the bagpipe most of the time, this keeps you tuned in. This is a band you really should get to watch sometimes. For a folkband quite heavy sound. Highly recommended!

Das Niveau
I can be short about this. I didn’t like it. The duo couldn’t entertain me for a moment with their jokes. It wasn’t clear to me if the twosome was there for the music of their drivel. A lot of babbling and not much fun.