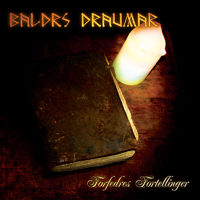 What a treat, the Frysian Vikingsons of Baldrs Draumar produced something again. Just as expected after their demo “Til Horisonten” and the EP “Noardseegermanen”, they now made a full length album “Forfedres Fortellinger”. What catches the eye is the whole package, a beautiful simple picture of a book. The book refers obviously to the title which means “tales of our forfathers”. Geffrey van der Bos did a great job with this. The booklet inside is simply beautiful. It contains the lyrics of all songs on a beautiful background in which a foto of the bandmembers can be found on the left pages. Also a great compliment for the photo on the back of the booklet.
But lets go to the CD itself. When you like albums with a introduction on it, you have a fine one with “Forfedres Foltellinger”. An atmospheric introduction to the story of Baldr. The the CD hits of with a delicious song, I can’t wait to hear this live, when the audience shall undoubtedly cheer along “Of Gods, men and trees”.
The firm rough stories are interrupted for a short while by the instumental piece “Vegtamskivioa”. But after this it goes on with good catchy loud banging songs. When I’ve got to the 10th song I can only think “I desperately want to see this guys on stage again”. Final conclusion until now can be, what a great album. How do you get this kind of word done with a self-released album?
But it isn’t finished already. “Ved Valhallas Bal”, a crow, beautiful acoustic guitar, again an unexpected side of Wildgeraesch voice, who has already shown out through the whole album that there are many facets to his voice, and not at least some beautiful flutes. A real icing on the cake, in which Baldrs Draumar shows they have a lot qualities.
Mmm, what I don’t like less about this CD. A minor thing but I keep asking myself: “why are the titles in a beautiful language and the lyrics just in plain English”. A small dissonance while the album, and that also count for the cover, have a beautiful unity.
Baldrs Draumar proves with “Forfedres Fortellinger” they are worthy of a big labels like Napalm, Noiseart of Nuclear Blast.