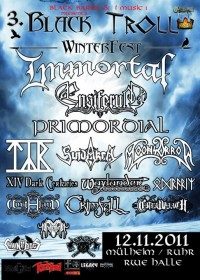 10:00 a.m. The doors should be open because 10:20 should sound the First notes through this hall, but it’s almost time and the doors are still not open? The queue is immense (fortunately we as reviewers are spoiled and get to stand inside). When the doors open (but we’re still not allowed to go through) we hear the First band, Draugr, is still sound checking… They’re late!
We have to adept for a while, we’re not used to go to this kind of festivals in a sports hall, but we have to say, it’s a perfect location. With 14 hours of music to go, it’s great you can sit down every now and a while and still look at and listen to what’s going on on stage. Like this you don’t really have to miss out on anything.
I fine spot to listen to Music and meet people. The sympathetic organisers of Holland’s own Wolfstijd festival are here too, of course we have time to meet our  photographing colleagues of Metalshots en Feeënstaub, and in  between we also get to meet some band members. A productive day.

Draugr
When they have to start suddenly the singer has to put on his sunglasses? The intro starts and the band is standing a little bit tame waiting to play, they’re just not glimpsing on their watches. The Music of Draugr sounds nice, but you have to keep your eyes shut. The presentation is awful, they seem very uninspired, the singer doesn’t make contact with the audience. The gentlemen weren’t allowed to play the full half hour, because they arrived at the venue to late and as a result of that they weren’t ready in time. The guitar player signs they’ve to quit, but the singer announces another song, the keyboards start off but this is broken off with an iron fist by the organisation. Draugr does no good to itself by this performance.
Score: 1/5

Chain of Dogs
After this messy end of Draugr it’s time for our own ‘Hobbit-eaters’. 10 minutes to change the stage for the first few bands, it’s like watching formula 1. And the pit stop of our own dogs was nice one. Within time all was set up and sounding good. Superb.
In my opinion you can really kick off, just like in Arnhem, with a song like ‘Doa is mie Land’, but they did it more modest and started off rather easy. Fortunately we got this song later on even as net ‘Hobbit-killer’, because ‘Hobbits ain’t cute, Hobbits are Food!’ Everything sounded good and it was a pity the first bands did not get to use the light effects, they were just playing under big lights.  Chain of Dogs gave a way a fine show, from which only one conclusion can be drawn: any organizer who doesn’t want to have hobbits on its festival, should contract this band.
It was already a perfect day for us.
Score: 4/5

Cruadalach
And because this day cannot disappoint us already, let the rest come on stage to. The Czechs, and they make it clear they are Czechs) are next in line. In a huge setting, with cello, flute, you name it, they’re entering the stage. Again the sound is fine right away. The songs are very solid and the energy is dripping of the stage. A Very good job, to lay down a sound like this with all this instruments. Cruadalach has also just half an hour to impress us, so obviously we get the best songs of their album and this at a very high rate. A downside is the energy of vocalist Jan. He bounces not only on the stage but runs through the audience and all over the place, very tiresome.
A personal peak of the day is the moment when front-man Jan, thanks us, in the folk-metal T-shirts for the review on their latest CD ‘Lead – Not Follow’.
Score: 4/5

Crimfall
I saw Crimfall two days before in Ulft and this wasn’t a punishment at all. The sound was two day ago kind of Gothic, today this was a lot less the case, apparently a case of adjustment of sound.
Compared to Ulft the performance was clearly much better, in particular their stage-behaviour had matured a lot. Again a lot of nice songs at a high rate just like the bands before them, but still the band was forced to cut out some great songs lie ‘Storm before the Calm’.
Conclusion: A fine act, and such great vocals!
Score: 4/5

Northland
Northland, is a Spanish band which drove of to Germany to surprise us, with an in my opinion very nice performance. Despite the fact of the ill choice of clothing, a football shirt is a little bit out of place with a folk-metal performance, they show their surely have to be  a pity I can only give away points once. Only considered their music I should have added 1 point, but with folk-metal goes an outfit. You don’t have to dress as a warrior, but acting if it’s soccer is very out of place.

Odroerir
Following Northland it was Odroerirs’ turn to hit the stage, there was a very good atmosphere in the hall. But the Germans managed to wash it all out. What a loveable and mealy-mouthed music they played! There was nothing special about it, nicely between the border set out by XIV Dark Centuries, because they appeared to be a worse version of XIV Dark Centuries.
Score: 2/5

Waylander
After a short break is were the blue-headed Northern Ireland guys of Waylander who were to play. I’d seen them before an the tiny stage of rock rock-café The Stage in Arnhem. A strong performance of the band, but the fact remains frontman Cíaran O’Hagan has difficulties transferring his energy to the audience. But hail to the gods, they finish their performance with the fabulous song ‘Born to the Fight’, which was worth the very long build up to this moment!
Score: 3/5

Negator
Negator was next in line, a blackmetal band not at any means within our working space, so we won’t review them here.

XIV Dark Centuries
Thuringen is well presented this day, it’s time for XIV Dark Centuries. The band is amongst us for ages, and released another album this year. The band stands his ground on stage. Not perfect everywhere, but a decent performance all in all.
Score: 4/5

Suidakra
But then, one of my favorite bands, SuidakrA, up-till now I never had the opportunity to see these guys live. Finally it’s going to happen. Forty minutes long the best Suidakra songs, with a peek when Tina Stabel sings along in the song ‘Biróg´s Oath’, of their latest CD. Incredibly awesome! Also compliment to front-man Arkadius, who’s doing a perfect job, sometimes needed at the front of the stage, some other time just out of sight. A minor downside is the absence of a bagpipe, when you listen carefully, you can hear a soft sample of this, fortunately not very loud, the most is been filled in with guitar.
Score: 4/5

Tyr
I was curious about this, one of my heroes in music, was completely owned up two day ago, how will they perform today?
It’s a shame, today was also bad. It was better than Ulft two days ago, but I had difficulties convincing my colleagues in Muelheim they were worse two days ago. Heri still had trouble to hit every not, but what stroke me the most, was the very bad sound we got. It resounded and there was a thumping which was not very pleasant for our ears, something which didn’t happen with the other bands. A second performance of Tyr we could better forget, then prefer thinking of ‘old times’ , which is a shame because their latest album was so strong.
Score: 2/5

Moonsorrow
MoonsorroW, people who read my stuff regularly will know this is my favourite band. They play again this evening the stuff I want to hear form them! A nice play-list with space for a few song we don’t get to hear normally like ‘Jotunheim’ and Raunioilla’. And of course a few must-play songs like,’Sankarihauta’ and ‘Tähdetön’. All in all a fabulous performance, I can endorse Michel’s’ review on the Dead Tyrants Tour, Moonsorrow covers you indeed with a warm blanket and puts you in a warm bath. But, this is only for the ones who kan close their eyes to enjoy this sometimes even sensitive metal. I’ve got confirmed why this is my favorite band!
Score: 5/5

Primordial
Wow, we’re dividing the writing today, and I’m allowed to do Primordial. This was THE treat of the evening to us both. It was the first time I saw them live and the band lived up all my expectations. I can do this kind of reviews very simple in one word:
Super
Put on a Primordial record, preferably put up the volume substantially, but aren’t we always doing this? And that’s what you get, a beautiful wall of sound, in which both guitar-players, drummer and bass player keep on going in a pounding, fairly monotonous sound which really hits you and brings you in a kind of trance. Singer A.A. Cuts this wall and jumps over it with his insane exciting and hypothetical voice. Insane, the crowd in the at this point loaded sporting hall goes completely out of their minds.
Score: 5/5

Ensiferum
This will be the end of the evening for us, because we rather want to stop with an main act in Folk-metal. Our day is already a good one and it was worth the trip, and that is a big understatement.
Ensiferum, to begin with, 5 out of 5 points, but they almost came short, the sound was not full proof, but a band with this experience can handle these issues. The audience goes wild anyway. Fortunately we get to listen to ‘Ahti’ once again and together with other hits like ‘Twilight Tavern’ and you name them, the Finns manage to get the whole building upside down. Hair is flying through the air, there are a lot of pits, and almost nobody of the thousands of people is standing still. The quiet ones are mostly lying down because of one cause only: drinking. The others enjoy the party, where even Heri van Tyr joins in to sing ‘Vandranen’ the bonus track of ‘From Afar’.
Score: 5/5

Immortal
A band which isn’t our cup of tea (what a nice English expression) and after a long straining day, with a lot of beautiful highlights we decide to leave for home, immediately after Ensiferum and leave Immortal for the real Immortal fans.