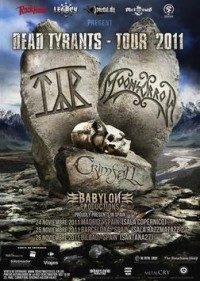 Despite of the fact I’m going to ‘Black Troll Winterfest’ in two days, and all three bands will be there to, I’m still going to the Dead Tyrants Tour. Because you won’t want to miss this, Crimfall, Moonsorrow and Tyr only a few steps from home in our own Achterhoek in the Netherlands.
The tour will stop in Ulft and that’s a little village in the eastern part of the Netherlands where there’s a lot of activity going on regarding cultural events. In the renovated part of the old DRU factory is a ‘Cultural factory’ with a theatre, but on the other side of this building they’ve build a concert hall. And I wonder, are there coming a lot of people to this new ‘DRUcultuurfabriek’, and how many people in this nice and quiet part of our country will go to a concert in the middle of a working week?
The DRU complex is beautifully renovated, but the signs in the area can be improved. The venue is gorgeous. Not to big, for a tour like this, though it’s a little big because of the fact the event is on a Thursday. First I want to give a compliment for the nice walls, with nice build-in lights and for the very kind staff. But it stroke me how little media-attention there had been. I think when you program this kind of bands, you can’t expect the local people will visit this, but people from the whole region will come and certainly from the German borderland which is very near by, and where this music is very popular.

Crimfall
Crimfall was the small warming up band on this tour. And they were lucky, in the beginning there were about 70 people present already.
The band did very well. Their experience on stage is not very big, announcing songs for instance is not be done with your back to the audience. But for the remainder is was very good. The sound was fierce and cut throug with the beautiful voice of their female vocalist. A pity the sound was somewhat to Gothic. I was very happy with the somewhat more metalsound of their second album ‘The Writ of Sword’. I also missed the nice folkpieces which were very well done on their albums, and I don’t like the use of too much samples.
Score: 3/5

Moonsorrow
Moonsorrow, I was under the impression a large part of the considerably grown amount of people came for them. Despite of the fact I don’t listen to Moonsorrow a lot, I always enjoy their performances. From the moment they begin to play, you get comfortably tucked in with a nice warm metal-blanket. A comfortable warm symphonic metal-bath, a treat to soak in for an hour. The band plays a large number of beautiful pieces, and their vocalist doesn’t forget to explain some of the songs to us, because his true Finnish metal-voice is of course something that can’t be understood. One little point of criticism doesn’t go out to the Fins, but considers a small group of local metalheads, which are very annoying every now and then during the whole evening.
Score: 4/5

Tyr
Until now it was already a fine evening and then we get also Tyr, what more do you want? I’ve seen the band many times now and their gigs are always fantastic, the sharp riffs and the proud Faroerse sound guarantee a party every time.
When they enter the stage, I first have to take a good look, the harmless gnome normally playing the bass, is transformed into a kind of Alexander Krull. The fierce warrior Heri, looks flat and far from heroic.
From the moment they begin to play, the band can’t convince me. Is the flue going round? Heri has to force the words out of his mouth sometimes. And the total sound is straight out very bad. A brief moment of heroism is the insane guitar duet of Heri and Terji: phenomenal!
Because of the lack of a playground in Ulft the local youth gets annoying again and I decide to choose another spot, I’m now standing right in front of the mixer. Wow, that was a shock, the sound is even worse standing here. Completely to my surprise the band thanks their sound-man a moment later, sending him into exile would have been a better thing to do.
I tolerate the very bad sound for a little while but when a waste of youth is again rolling across the floor, I decide it has been enough for tonight.
I wish the fans in Kerkrade a better performance tomorrow, but I really hope, Tyr will skip this concert and take a day rest, so I can see them at their best in two day at ‘Black Troll Winterfest’. One positive point, Heri and his mates continue to fight the whole evening to entertain the audience.
Score: 1/5