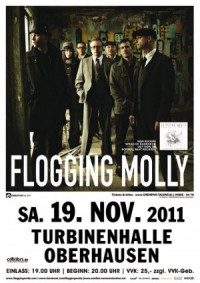 The old factory gets filled with enthusiastic people. The venue where festivals like Paganfest and Heidenfest took place last year is now the domain of Flogging Molly. An mixed audience consisting of a lot of Young Flogging Molly and Dropkick Murphy fans, a few Young metal fans and a bunch of older ‘more civilized’ people come to watch this event.

The Minutes
The minutes have to go on stage First, it’s a band that’s clearly has a high opinion of itself. The music isn’t that bad either, but it doesn’t grab you. They try to give away a spectacular show, but especially the vocalist is forcing this to much. It’s very clear the band know a lot of ways to let their guitars scream, but this is also one of the things that’s shown to often. Another annoying thing is the changing of guitars during the whole gig, I don’t think this can be done more often in 30 minutes. And I have to say I won’t forget they were The Minutes after being told between almost every song and sometimes during the song too.

The Mighty Stef
After this The Mighty Stef entered the stage, a band which according to themselves never plays for such a big audience. But they do it well. They start of with an nice and quite part, which is a little bit soft, but musically it nicely done and all fits perfectly. They have the audiences’ attention. And for a support act this is nice. When they  change about halfway to somewhat more up-tempo songs. It’s a little bit less entertaining, but all in all it was a good show for a support act. The audience stays amazingly calm and honestly there’s no reason to hit the roof.

Flogging Molly
The hall is loaded at this point, there are more people there, than I’ve ever seen at this venue, even the balcony is full. The lights go out, leaving a loud crowd screaming: FLOGGING MOLLY! FLOGGING MOLLY! etc.
If the Irish Americans finally hit the stage, it only gets louder. They play 3 notes and crowd goes crazy, the cosy mixture of old and young, die hard fans and somewhat more moderate visitors disappears in a blink of an eye. There’s a pit reaching all up to the mixing table at 1/3 of the hall. In a few seconds the roofs already of the building. Wow, what a party, just unbelievable. And even where the pit ends no one’s standing still, which is simply impossible with an energetic band like this. They play all a lot of their hits for one and a half hour, party with no boundaries. After this about 15 minutes of encores and a dozen of silly jokes, coming from the stage as the audience as well. Despite of the fact the banjo player had to go back to the USA they played very well, using a substitute like the guitar player of The Mighty Stef in songs like ‘Drunken Lullabies’ and he did his job very well.
Nice invention, the wall of death was replaced with a king of circle of death, where everyone goes towards the middle of the circle? And in the song ‘Float’ (which is a very nice quiet song) there was another circle, I was surprised like a lot of people, but when there was enough space a few sat on the ground and began to row. This started with three guys and ended in 2 rows of 10! great party! I can highly recommend this to anyone who loves party, bear, jumping, a lot of party, folk, and lots of more party. Come along, I’m going for sure the next time!
Score: 10/10