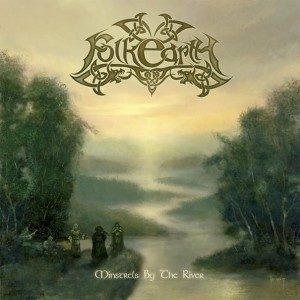 In 2008 Folkearth releases an acoustic album ‘Songs of Yore’. A lot of releases later they repeat this in 2011 with the acoustic album ‘Minstrels by the River’.
The album begins with the track ‘Viking’s Anthem’ an instrumental track with acoustic guitar, violin and percussion, sounds a bit messy sometimes.
‘Beasts from the Blizzard’ is an nice ‘campfire-song’ with acoustic guitar and low female Slavic vocals.
‘Cataphract Legion’ begins with flute after which male vocals join in. A nice tune at which you can’t sit still. This is how we like to hear them.
In the song ‘Lord of the Spear’ a dreamy female voice can be heard. This causes a somewhat Gothic feel.
A very curious beginning with violin and female voices is the beginning of ‘Set Sails to Conquer’, a very beautiful composition, in which the vocals sound very harmonic together and in which is a huge role for the violin-player.
‘Warrior Code’ is a nice and easy track with a very dreamy touch.
After this we get ‘Freedom or Death’ with a nice intro of guitar which gets assistance of a flute, again with somewhat dreamy vocals.
And then we get an over eight minutes lasting story called ‘Folkearth’ which stays interesting despite of its length.
And the last song of this acoustic album is the well-known Slavic folksong ‘Сон Степана Разина’, always a nice one, and this one is also very nicely done. I think the Slavic lyrics suite better with this female vocals.

Folkearth, has made a nice album with ‘Minstrels by the River’. I can’t say you should run to the store to buy it immediately, because you definitely should posses this album. But for the fans of Slavic metal it’s a nice album. And it’s a fact there are not a lot of acoustic albums in folk-metal, so there multiple reasons to buy this one.