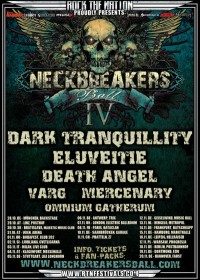 Within a month of day Heidenfest was within our borders, there’s another Rock the Nation event, this time it’s ‘Neckbreakers ball’. The party went on in Hengelo, which was a somewhat drive than our usual places to go to like Tilburg or Eindhoven. In this event there was also some attention to folk-metal. This time it was to Varg and Eluveitie to entertain us with some decent metal.

Varg
After a long trip we were just in time to see the four Germans at work. This band could never hold my attention for a whole show, but I decided to give them another chance.
I can be short about their performance, it couldn’t get excited this time either.
The guitar players played very sloppy and were even false sometimes. The vocalist was a complete sham. With his desperate attempts to stir the audience, at which he very frequently used the word ‘fucking’, doing so he unmade the atmosphere which was build during the songs. The audience obviously had no appetite for this, because they only applauded politely at the end of all songs. Because of these desperate attempts to win the audience which were in vain, the singer looked very clumsy, instead of sympathetic.
The Rammstein cover, ‘Links, 2 3 4’ was played without inspiration and completely washed-out. With the final song ‘Wolfskult’ there came an end at this performance. Again, Varg didn’t excite me a bit.
Score: 2/5

Eluveitie
Fortunately also Eluveitie was part of the line-up, to show how folk-metal has to e done. The band experienced serious sound problems, especially in the first part of the act, but this became better with each song. They played a lot a very different song, which culminated with ‘Your Gaulish War’ and ‘Tegernako’. But there were also some weaknesses in their performance. The vocals of Chrigel didn’t always sound right, and the lead-guitar was much to loud. This could specially be noticed in ‘Inis Mona’, causing the normally very bombastic song to sound very hollow. All in all it was a nice gig, but they can do better. If the problem lay with the venue, the sound-engineer or the gigantic number of instruments which have to be tuned to each other, we’ll never know, but the fact is Eluveitie can do better.
Score: 3/5