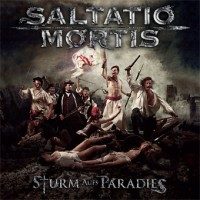 Thursday-night, 24th November, the day Saltatio Mortis would play in ‘de Effenaar’. With Fejd as support it promised to be a very beautiful evening. Despite the fact it wasn’t very crowded the whole evening, there was a fine atmosphere and we got to see two beautiful performances.

Fejd
Fejd had to kick-off this evening. Because the trains couldn’t keep their schedules tonight, we had to miss the First part of the set of this Swedish band. Fortunately we still got to see a large part. About the performance I can be short. What were they good! The sound was nearly perfect, the sound-engineer created an ice full sound, without creating a wall of noise. The band sounded sometimes solid and hard, to change to symphonic much easier pieces. They were very enthusiastic on stage, and were clearly enjoying it themselves. Regrettably there had to come an end on all this, with ‘Gryning’, Fejd decided to blew us away for the last time. The band made an smashing impression, mostly because of the nice sound. The mix between louder and easier songs make this performing very varied. This is a must to see live!
Score: 5/5

Saltatio Mortis
After Fejd is was Saltatio Mortis’ turn to enter the stage. When it began to be a little bit crowded with people from their fanclub in front of the stage, the seven pieced band kicked off with the song ‘Ode an die Feindschaft’ from their new record ‘sturm aufs paradies’. The emphasis of this show was clearly with this CD, of which a large amount of songs come along. Surprisingly the sound was again very good, which was a benefit for the performance. The mix of guitars, bass, drums, vocals and authentic instruments like flute, hurdy-gurdy and bagpipe could clearly be heard. The band,not used to small venues like de Effenaar any more, was searching for the right presentation in the beginning. The act seemed in the beginning very suitable for big venues and festivals where the band usually can be seen, but seemed to work out reversed for a small venue like this. At the third song this was changed by the band, which caused a nice cosy and intimate atmosphere. The band got the audience involved in the show over and over again. All was complete when singer Alea jumped into the audience and started to dance together with the fans. But we also have to go earlier tonight due to the before mentioned trains. It’s a shame we had to miss the encores. In short: Another fine performance of this German giants of medieval-rock, who are perfectly suited for small venues like de Effenaar as well.
Score: 5/5