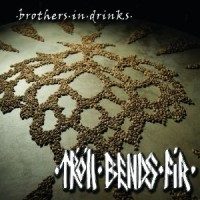 Troll Bends Fir signs with Soundage Productions in 2012, a deal from which they hope to make their last album ‘Brothers in Drinks’ more available. This album was released in 2011 already, but this deal is a good reason to lent our ears to this album now.
Brothers in Drinks is a title which does suspect we get a lot of drinking-songs, let’s find out…
We start with the title-song Brothers in Drinks and yes, this is immediately a nice drinking song. Nice high speed, nice male and female voices and very very catchy music. You don’t have to know this band, it’s immediately fun. And I don’t know what it really about because the vocals are in Russian, but who care, we all speak Russian after a few drinks don’t we….
Next song Hoplnir, this one is even nice. The whistles in this one are so nice, you can’t sit still in this one. And this bass-line in between, simple but awesome.
It’s all starts a bit slower in Beer Mantra, but this is only temporary. Troll Bends Fir knows how to use their voices. They make maximum use of the things you can do with a clean female and a somewhat more raw male voice.
Ass-shaking Dance, is really a good title listen to this song and you have the urge to shake your ass at once. In this one we get a nice traditional female voice and a nice violin-part. At this point I can almost wait from jumping through the songs, because it all sounds so nice.
And it goes on like this, in Octoberfest is almost if you hear Jonne of Korpiklaani sing, but we have to wait for that one some more. All songs have something Korpiklaani like, but they’re also very different. But we can easily say, the fans of Korpiklaani will love Troll Bends Fir for sure. Their music belongs in the same corner as Korpiklaani. But on the other hand, their music doesn’t belong in a corner at all, it belongs in a nice concert-hall, with plenty of space to jump, pit, dance, move etc. Because it always time for an Octoberfest!
And in Western-Europe we think of typical Russian music as…… Kamarinskay. Lay your arms around your neighbours shoulders and lift your legs one by one…..
Then all of a sudden we seem to get a serious song. No funny speedy tunes but nice whistles and a nice vocals. Ave, Celia! It reminds me of the album ‘Springtime’ by Viter at once.
But this is only a temporary thing in Catch a Salmon! There are nice speedy, funny whistles and almost no lyrics. And I don’t know how they catch this fish, listening to the song I thin they’re running downhill trough a stream to catch it.
Tired of all this physical stuff we sit down and drink a ‘Little Mug of Dark Ale’, it seems we’ve been drinking a while when we get to this one and you can sing along nicely with this slow one.
In Trolls’ Rise we get strong powerful clean female vocals, almost if we hear Arkona. This song is also a bit different one. A song in which you can feel the pride of these Trolls when they stand up and rise.
The last song is again completely in style with the larger part of the songs. Nice speedy, catchy, with nice female and male vocals. This one is featuring Jonne Järvelä and this is an obvious choice because the song has this humppa refrain in which Jonne shows his nice way of traditional Finnish singing.

Troll Bends Fir has made a really nice album with this one. There are a lot of very good catchy songs on it. It seems Korpiklaani doesn’t want to make this kind of party-music any more, but who cares when a band like Troll Bends Fir can fill this gap easily. This band deserves a nice big label, because they’re know exactly how to make the beautiful kind of party folk-metal. And I can only advise promoters of festivals to sign this band. This is party metal how it’s meant to be.