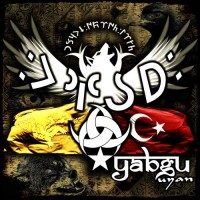 Often we hear ‘in Folk-metal it’s all the same, a statement I totally disagree with. There are a lot of different ways to create Folk-metal, but you can add one to the list. We stumbled upon the debut-EP of the Anatolian (Turkey) band Yabgu. Their debut Uyan is something different. The foundation of their music is laid by solid metal, but the Anatolian influences give it a very distinct sound.
In the intro of Dombyra it’s clear at once they get their influences from a different direction. The authentic sounds come from the ancient Anatolian folk-music. Kongurei is a quiet track, which reminds you of hot day on the steppes of central Turkey, you can feel the heat making you lazy.
But you can get rid of this feeling in Tuvgan Elım Noghai El, where there solid metal again. The song has a kind of throat-singing which makes it very different and gives it an Oriental atmosphere.
A rather fast Mouth harp, followed by bad sounding guitars, the quality of the recordings are not the very best. When they would have been better it should sound even nicer, but the throat singing in this one sticks in your head, that’s for sure.

Yabgu has managed to create a nice Turkish version of Folk-metal, and this is nice. Hopefully the band is able to record the next on with a better quality. It’s very nice to hear a band which uses their own folklore in a very fine way to give folk-metal an extra dimension.