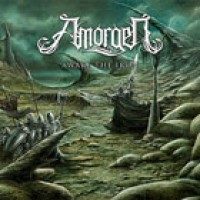 Finally, it’s there! The First EP from the Dutch folk-metalband Amorgen! After a demo from 2010, the five of Amorgen come with their first ‘real’ release. Amorgen is a band who plays a form of ‘epic folk-metal’, with a lot of death-metal influences.
The first thing that stands out on this EP is the beautiful artwork. It invites me, as listener, to immediately start listening to the songs! The first song ‘A wanderer’s heart’ starts off slowly and with a lot of atmosphere, only to grow to a great climax. This song goes seamlessly into ‘Hail to the Heathen God’, the real start of the record. And what kind of start! Immediately, the band kicks off with a heavy hitter, which sounds really catchy. Only small disadvantage is that the clean vocals are a bit soft in the mix.
This continues throughout the whole record, with catchy songs that rock and immediately invites you to start headbanging. Amorgen knows how to play a way of folk-metal which sounds familiar, without using the standard stereotypes.
One extra point definitely worth mentioning; the lyrics. The songs of ‘Awake the Iron’ form a concept around the bard ‘Amorgen’. All lyrics are sung from his perspective. The lyrics are strong, and fit perfectly within the music.
The conclusion is simple. Amorgen may be more than proud on what they deliver with this record. The music is catchy and pounding, without getting boring or cliche. While it sometimes feels that the instruments are not perfectly mixed, it doesn’t spoil the pleasure. Definitely listen to this!