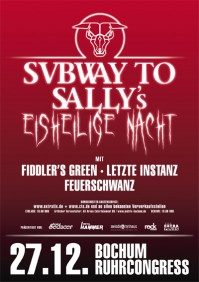 27 December, it’s time for “Eisheilige Nacht” in Bochum. A spot in the German ruhrarea which has good access to the Netherlands and which can offer a good possibility for bigger concerts, with a venue like the Ruhrcongress.
Eisheilige Nacht is invented by Subway to Sally to kill the quiet time around Christmas. This year for the ninth time the band invites arranges this special concerts. The event grew over the years and this year they’v managed to get a fantastic line-up. Fortunately Subway to Sally has announced there will be another ‘Eisheilige Nacht’ in 2012, something to look really forward to.

Feuerschwanz
The always hilarious band Feuerschwanz gets to open the festival. As we’re used to the intro of Feuerschwanz contains of a recited story. Personally I like the one telling us about the knights of Feuerschwanz better, but even on this kind of detail the bands keep it’s originality! What struck was the fact the band had no problems to entertain a larger crowd, something that’s a little more difficult for a “comedy” band, like they are. The accent is not on the music, although the members are not bad musicians at all, but the emphasis is on the humor. The lyrics are always funny today the playlist was somewhat less obscene. The band mainly took a stand for the use of true mead today. And of course they took the opportunity to paint the town red, because the plague was coming to town. And when you’re in the mood for dry comedy, you get a really nice treat with the very dry song “Wir Lieben Dudelsack”. Delicious this band, a pity they only had to play for half an hour, because the whole audience was going along with this naughty knights.
Score: 4/5

Fiddler’s Green
Hereafter it was surprisingly Fiddler’s Green’s turn. These speedfolkers had of course a somewhat sober show, like as usual with this kind of music, but there was a big party going on on stage. At the start the violin sounded not very good, but fortunately this was quickly mended. Kicking off with a song as “Wall of Folk” it was clear they only went for an excellent performance. And of course “The Rocky Road to Dublin” was a part of their playlist. Their magnificent invention the wall of folk turned out reasonably well. For everyone who’s not familiar with this. It’s a wall of death, but you don’t clash halfway, but you seek a way through the wall. In this way you can do this over and over again. One, Two, Three, Four, Five…..
Score: 5/5

Letzte Instanz
When I listen to Letzte Instanz at home, it seems the band goes in all directions, and leaves me confused. Some songs I like, but others not so much. On the other hand, in Germany the band has a huge amount of fans, so you sometimes wonder why this is.
After tonight it’s completely clear to me. When you see this band live, you get to see a perfect show. The tracks they play show a great consistency and the whole is presented with a very nice light-show. The guys are completely dressed in black, what makes a perfect picture. It’s a complete puzzle to me why they take of their shirts during the show. This adds nothing to show, it derogates the total picture. It has to say this is the only negative thing that can be said about the show. But while the gentlemen are obviously going for the perfect show, I’ll give them only 4 instead of the whole 5 points.
The last two records of the band, “Schuldig” and “Heilig”, are part of a trilogy, the band announces to release the final part of this trilogy “Ewig” next year. These titles give a good picture of the band’s show, dark, impressive, oppressive, compelling. This is a band you have to get to see sometime, even if you think their records are not the nicest thing you ever heard.
Score: 4/5

Then it’s time for the real thing. And what a impression they make….They immediately hit off with a huge fire-show and this goes on the whole show. Fire, smoke and a very nice gain: background panels showing images and effects supporting their songs, gorgeous. “Wo Rosen Bluh’n” is supported with images of lightning, and skulls and crosses. My special compliments to the crew who presented this elements all with perfect timing.
The fact this band knows how to create a perfect performance, shows in songs “Das Schwarze Meer”, a track of their latest album. The song is inpired by their experiences at the Summerbreeze festival, where many “ships” were cruising on a huge black see (Schwarze Meer = Black Sea). The band asks the audience in a disguised to surf the crowd, and the audience understands this well. Even singer Eric Fish goes in the crowd on a simular way.
Like “Letzte Instanz” they also mention the fact the World will end in 2012 with the song “MMXII”, and we get to see impressive images in this song too. It’s not easy to name a thing that wasn’t perfect, so ‘Perfect’ is the only thing we can say. “Eisblumen” and “Wenn Engel Hassen”, were also very impressive. And even the nice resting point, a solo by Ingo was breathtaking beautiful.
When the band leaves the stage is clear this can’t end without a true German ‘Zugabe’ (encore). In Germany no “WE want more”, but with Subway to Sally even no usual German “Zugabe”, the audience sings loudly “Blut, blut…..” this is the sign for the band they can’t go home yet. They start their encore with “Sieben” and after this a beautiful medley, then of course “Julia und die Rauber” and then it’s really time to go. In short: Wow, impressive.
Score: 5/5