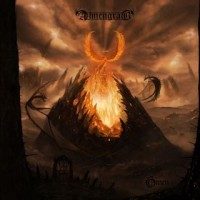 Ahnengrab is an upcoming name in German Paganmetal.
At last they’ve released with this album ‘Omen’ a follow up for their first record. I’m very curious about what they have to offer us.

Campfire and a little bird, then guitar and violin. This makes the start of the intro, for a very short time you get the chance to become warm. Then we go on to ‘Seeking for the past’. You notice at once this is typical German Paganmetal. But it’s slightly different from other bands, it’s not that stereotypic like a lot of bands in this genre are. They try to produce their own sound.

The album is alright, there’s nothing very special on it, starting from ‘Feuer Kapitel’ it becomes something more exciting and from there songs are more catchy. The guitar-riffs are more sticky and the vocals are better and more alternating.
The violin that can be found throughout the album is a magnificent enrichment for the sound. Musically it fits very good.
There are a lot of delicious fast songs, but there’s also a little piece of rest every now and then.

I want to mention the outro especially, WOW!
A beautiful composed folky piece with a lot of instruments. When this ends after almost 5 minutes, you only want more!

Conclusion: this is a good album, surely one showing Ahnengrab is still moving forward. I feeling like going to a gig once more. Can you miss out on this album in your collection? Probably you can, but it’s a nice supplement, especially when you like German Paganmetal.