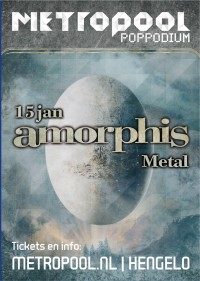 In a hectic year, when all will end, for thing’s for sure. The end of “The beginning of Times” (tour) was in Hengelo. And by all means, an evening one will never forget. Fine work of the people behind “Metropool” to get this gig to Hengelo.

The Man Eating Tree
As a starter we got ‘The man Eating Tree’, a Finnish conspiracy making Atmosferic metal. It’s not the Music I came for, but I didn’t dislike it. Musically it was not bad at all. Though the singer named himself an old hippie, and he has some characteristic of that, he has a delicious voice to listen to. I’ve heard no song in peticular I thought was superb, but on the other hand there wasn’t a song I completely disliked either. A fine opening act.

Leprous
What a phenomenal musicians, just incredible. But they lost me completely; I had no clue what ‘Leprous’ was trying to tell me. What was funny to experience was the fact that the Music made you think. I got the feeling “what do I have to think about this”, but even at the toilets I overheard discussions about their Music. And even on our way back home in the car the discussion came back.
Conclusion: no conclusion, it’s completely up to yourself what to think of this. My personal opinion: they’re musically genius lunatics.

Amorphis
At last the band we came for, en although they’re playing in a relatively small venue, they are metal giants. After a seven week tour, they close up their “The Beginning of Times” tour in Hengelo. What do you need on stage when you have a singer like Tomi? Exactly some rest and the band knows this too. The décor is almost museum-like, with in the back three gigantic rustically paintings with of course the egg in the middle. In the front are on the right and left of the stage two quite similar banners. The other band members are also dressed in simply black to create a nice easy atmosphere on the stage. With the music this is not the case, they musicality is bursting of these guys. With the extrovert Tomi in their middle who’s moving gourgious extravagant, with his long dreadlocks banging across the stage, it forms a “perfect picture”.
The band takes us on a one hour trip through their entire repertoire from “beginning of times” songs like ‘mermaid’ ‘till beginning of Amorphis songs like ‘Into Hiding’, a wonderful journey at which a very enthusiastic audience, gets a very nice treat, almost every old and new ‘hits’ comes along. During a funny ‘introduction of the band’ we were treated by this musician on a nice piece of their skills. On keyboard we got a piece of decent Holland stuff: ‘No Limit’ where Tomi, and everyone in the audience sang along beautifully. Fortunately we got true Amorphis songs again after this. After the regular set, the band came back for another quarter which ended with the inevitable end ‘House of Sleep.
What can we otherwise say besides this was superb!

Amon Amarth
‘Deceiver of the Gods’

Ol’ Jolly Roger
‘From the Depths we Rise’