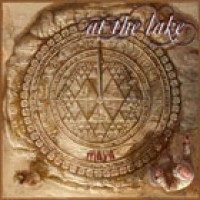 At the Lake, symphonic folk-metal band from Poland, released a new CD. It seems all bands are referring to the end of the Maya calendar this days. The Polish sextet named their new album simply after this great ancient race “Maya”. The songs from At the Lake I’ve heard until this album had all a large amount of folk-sound. Shall the band continue this with their new album?
When you put the record on, you immediately notice the symphonic part of the sound, this is done with nice violin parts, with a classical taste. It takes until the third song ‘Forget’ to get a little taste of folk. The album goes further in this not very striking way. There are no remarkable positive of negative compositions on it. ‘The Perfect Man’ is in my opinion the nicest song, this because of the display the band gives in this song of a broad range of skills they have in the band.
All in all “Maya” the folk doesn’t drip of the album, and the metal-fans don’t get what they like either. The fans of bands like Lyriel will like this album very much. In my opinion it’s all a bit to polished.
The band added two bonus-tracks to this CD: ‘Sonne; , a Rammstein cover. Personally I like this song the best. The way At the Lake ‘does’ this song, is fitting very well to the sound and musical possibilities of the band.
The second bonus is also worth to be mentioned, ‘Dziecko we Mgle’, and well for the following reason. This song is in Polish, this fits very well to the voice of Natalia. The classical sounding voice remembers me in the rest of the album of Tarja (ex-nightwish) announcing a song. For the people who don’t know Tarja, the accent is too much. I think it doesn’t do right to the music, while I don’t get this feeling with this song at all.
All in all nog a bad album, but unfortunately is doesn’t go beyond the average records.